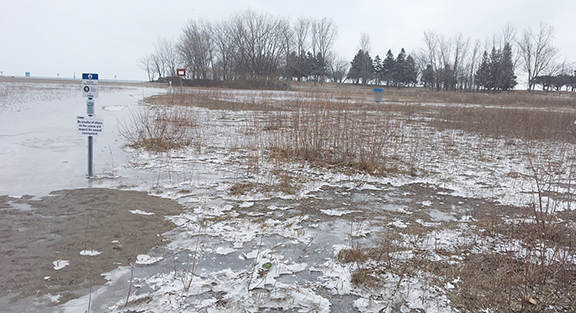 This shot of the South Course of the Beaches Disc Golf Course on Woodbine Beach was taken early last week. The baskets on poles have since been removed by the City of Toronto as it pauses operations on the South Course for this spring and summer to monitor bird and plant life in the area. Inset photo shows a map of the South Course. Photos by Alan Shackleton.

The nine-hole expansion of the Beaches Disc Golf Course located at the west end of Woodbine Beach has been removed as of late last week.

The course’s location was a source of controversy as many in the environmental and bird-watching community said the site should have been left a natural area for migrating birds, other wildlife and plants.

It also set off disagreements between those who said the City of Toronto needs to provide more spaces for recreational opportunities in its parks, and those who wanted the area to be deemed natural and protected from any uses.

The disc golf course expansion opened in November of 2021, and was an addition to the existing nine-hole Beaches Disc Golf Course already located in the north end of Ashbridges Bay Park.

The location of the course expansion was decided upon by the City of Toronto last year, but once the course opened on the west end of Woodbine Beach there were numerous complaints about the site since it was being used by migrating birds. Beaches-East York Councillor Brad Bradford said those concerns had been heard and the course expansion was being paused for the spring migration season. He said the parks department and the Toronto Regional Conservation Authority (TRCA) will monitor the area this spring and summer.

The baskets on metal poles that disc golfers use as targets have been removed from the site and players will not be there.

“At this time, removing the baskets is a temporary measure, and staff are continuing to analyze the area and look into all options for reinstallation or re-location options for all-season use,” said Bradford.

In response to the move by the city, the following letter was sent to Beach Metro Community News last week:

“Late last month our nature minded community received two letters, one from Beaches-East York Councillor Brad Bradford and the other from Brock Rochus our Park Supervisor. Those letters informed us that the baskets from the Beaches Disc Golf Course on Woodbine Beach would be removed by March 31 (which they have been).

The Toronto Ornithological Club, the Toronto Field Naturalists, the Ontario Field Ornithologists, the Toronto Entomologists Association, Nature Canada’s Bird Friendly Team of the City-Toronto Team, nature minded individuals of Toronto and the constituents of Ward 19, applaud and thank both the councillor’s office and Toronto Parks, Forestry and Recreation for reconsidering the impact of having this disc golf course take over this dune habitat on Woodbine Beach.

A special thank you to Brock Rochus the Park Supervisor, for keeping the communications flowing.

The golf course will be “paused” for the spring and summer months during the breeding and nesting season of our migratory birds and insects. Monitoring by the City of Toronto and TRCA will continue.

Further to this, the Toronto Nature Stewards will be removing invasive plants in this dune habitat. The ongoing naturalization of this dune habitat has provided more 271 sightings on the INaturalist app since 2017, some rare.including a plant identified in 2020 that had not been seen in Toronto for 100 years. See more at www.inaturalist.org/projects/west-woodbine-beach-habitat.

City of Toronto staff will work over the summer and early fall to evaluate and consider a seasonal course installation for winter periods at either this, or another location in the area. We have also been told that this information will be used to inform future disc golf locations around Toronto.

Answers to some questions asked on Nov. 26, 2021, have yet to be determined. Further investigation is required. I’m curious to see the affects of the new No Dog’s on the Beach signs from April 1-Nov. 1.

Nature can’t protect itself and it is greatly appreciated that Toronto’s nature minded community with their amalgamated viewpoint has been taken into consideration.

We offer as we have from Oct. 2021 to engage in transparent and all-inclusive consultation and are looking forward in doing so.

The nature community is thrilled to hear that Mayor John Tory’s abbreviated quote of July 13, 2021 “Now is the time to renew our commitment to the design and protection of our green spaces” is being heard.

Clyde Robinson, Noam Markus, and on behalf of all the groups and people mentioned above”

I played the 9 holes that were removed once. It did not feel to me like the carefully planned and well executed layout resulted in disc golf “taking over a dune habitat.” It was integrated quite sensitively to the landscape. I believe there was extensive pre-consultation with the city, including multiple rounds of approvals, so it’s not like it was unthinkingly done, although that part of the story hasn’t made it in to most of the opinion pieces I am seeing about this situation.

Much of the area was shared with a clearly much in-use space for dog owners to let their pets romp off leash. When I played one took off with a disc and we had to chase the owner down to get it back!

For sure, all of this mixed-use application of public parkland that accommodates light infrastructure for disc golfers and dog owners invites much more foot traffic than if the land is preserved just for bird watchers to enjoy. Pristine vegetation will not go untouched along the “fairway,”, much as we all wish we never throw in the rough lol

When I visited, though, it did seem like the land was pretty well visited, and much in use by enough park patrons that it seemed unlikely too many nesting birds would want to or be able to safely rely on that park space, or potential dune-like habitat, if you will, as a nature conservancy of some kind.

Is the vision to now pretty fully restore this whole area to wild habitat? Which of course means you will have to also go after the dog owners too, as…

Disc golf adds to general health and mental well being. It is a fun way to exersise too. Having said that i highly recomend it to older players and the young.