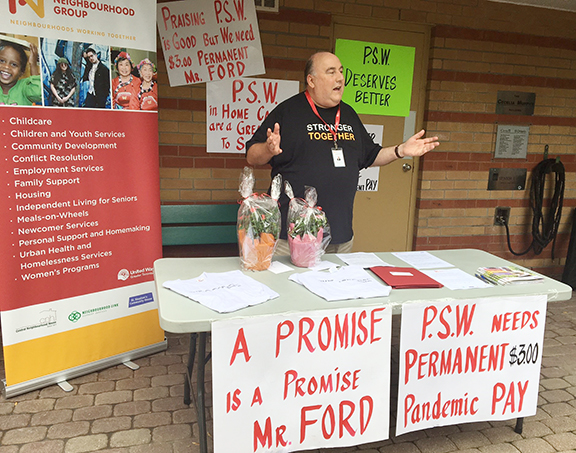 Bill Sinclair, President and CEO of The Neighbourhood Group, was recently honoured with the 2021 Frances Lanking Lifetime Achievement Award.

The award is presented annually to individuals having had long term and extensive impact on the non-profit community sector in Toronto.

“I enjoy helping people and building the social safety net that helps define us as Canadians.  I feel we are stronger working together than one family can be alone,” said Sinclair.

Sinclair grew up in west-end Toronto and sees his upbringing as having been “very Parkdale”.

His grandfather drove the streetcar on Queen Street. His mother grew up in Parkdale. Sinclair was born in St. Joseph’s Hospital at The Queensway and Sunnyside avenue.

Though a lot of the work he does with The Neighbourhood Group is in East Toronto, Sinclair is a resident of the Mimico area of Etobicoke.

Sinclair was first exposed to community service when his mother managed a meals on wheels program for some of the elderly residents of Parkdale. As a young person, Sinclair had summer positions at St. Christopher House, St. Stephen’s Community House, and West Toronto Support Services for Seniors.

Once he finished his formal education, Sinclair helped people find and maintain housing in the north-west region of Toronto. He saw the enormous challenges people face when homeless. He also saw the unique challenges new Canadians faced as they worked to settle in.

Early in his career he played a key role in setting up a shelter for young people in what was then the City of York in Metropolitan Toronto.

Sinclair left the profession for a time as the Progressive Conservative government of Mike Harris in the late 1990s led to the end of certain provincial programs and the layoff staff.

“But my heart was still in community services,” said Sinclair.

Sinclair is passionate about what good can be done in the community when organizations come together. For example, Michael Garron Hospital collaborated with personal support workers from TNG to go door to door vaccinating TNG tenants.

Some of the targeted groups that TNG tries to support are seniors, young people, and new Canadians.

Going forward, TNG is prioritizing the “health, employment, and access to information” among new Canadians as well as community members in high-rise buildings.

Sinclair is pleased with the efforts to help those less fortunate in the East Toronto community during the COVID-19 pandemic. Some of the work is just people being caring and other work is more formal and organized.

Informal work has included, “watching out for a neighbour, going grocery shopping for an older friend, or providing support to parents who have children restless at home.”

Sinclair noted the need for this work to continue after the pandemic. He suggested that local residents who want to help should reach out to one of TNG’s Volunteer Coordinators or Volunteer Toronto.

Sinclair said one of the most fundamental challenges facing Toronto is the lack of affordable housing.

Shelters are full, people are residing in tents, and people are running out of money then facing eviction, he said.

Sinclair emphasized the need to have all Torontonians housed, whether that involves building new housing or keeping people in their current housing.

TNG does have a housing program which goes back decades. But the intensity of need has increased dramatically in the recent past.

TNG opened one building in 2020 then another in 2021. Residents are connected with “health care, employment, and family supports.” Assistance is in place 24 hours per day. There are also meetings so that these residents and their neighbours all feel safe.

“I think one of the reasons for my lifetime achievement award is my lifelong interest in community-municipality-institutional partnerships.  Like the youth shelter, I have been part of many partnerships bringing charitable organizations, the City of Toronto, and partners like school boards and hospitals to do things that none could do alone,” Sinclair said.

For information on becoming a volunteer with The Neighbourhood Group, please go to https://www.theneighbourhoodgroup.org/become-a-volunteer/ or call 416-691-7407, ext. 236 or send an email to volunteer@tngcs.org