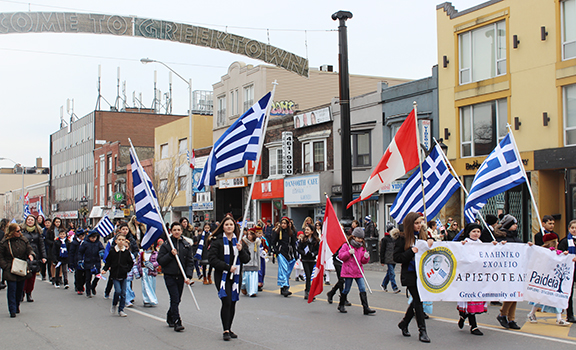 Participants take part in the 2019 Greek Independence Day parade along Danforth Avenue. This year's parade takes place Sunday, March 27. It begins at 1 p.m. at Danforth and Donlands and will head west along the Danforth to Broadview. Photo: Beach Metro Community News file photo.

Greek Independence Day will be celebrated by Toronto’s Greek community with a parade along Danforth Avenue on the afternoon of Sunday, March 27.

The parade begins at 1 p.m. at Donlands and Danforth avenues and will head west along Danforth Avenue to Broadview Avenue.

The annual parade marks the Greek War of Independence against the Ottoman Empire in the early 1800s which ultimately led to Greece’s formation as a independent state. The day is celebrated on March 25, and Toronto’s Greek community holds its parade on the Sunday closest to that date.

As part of the Greek Independence Day events, there will also be a wreath laying ceremony taking place at 2:30 p.m. on March 27 at the Alexander The Great Parkette at Logan and Danforth avenues.

A number of local road closures will be taking place Sunday along Danforth Avenue for the parade. Those attending the parade are urged to take public transit if possible.