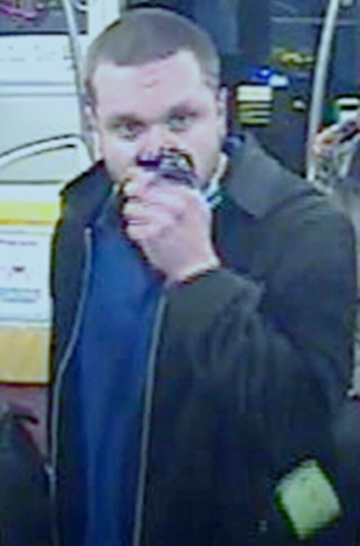 Toronto police have released security camera images of a man wanted in connection with a number of recent incidents in East Toronto.

Toronto police are looking for a man who allegedly stole an emergency hammer from a TTC streetcar and then may have used it to break the front window an East Toronto store.

According to police, on Friday Feb. 25, a man pulled out the emergency hammer off a streetcar near Queen Street East and Coxwell Avenue. He then left the streetcar with that hammer, police alleged

On Saturday, March 12, police received reports of a man allegedly trespassing on a residential property in the Broadview and Browning avenues at 2:40 a.m. Finally, police alleged a man used what was possibly the hammer stolen from the streetcar to break a window at the front of a store, near Gerrard Street East and Broadview Avenue, and then steal items from behind the window. That incident took place at 1:29 a.m. Monday March 21.

Police have released a number of security camera images of a man they are seeking in connection with these incidents.

He is described as five-feet, eight-inches tall, with a medium build. He may have worn a mask, a blue baseball hat, a dark leather jacket with a blues logo on its back, a grey shirt that hangs low, a dark pair of pants and a dark pair of shoes. He also has been in possession of the little metallic hammer from the streetcar, that has the red handle.