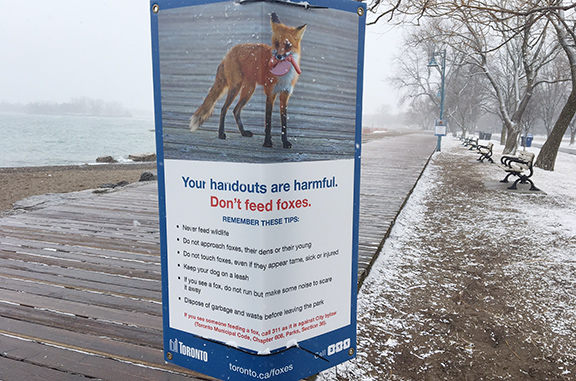 Signs are up on the Boardwalk telling residents to leave the fox den in the area alone. The baby foxes, kits, are expected to be born sometime this month. This is the third year a fox family has established a den under the Boardwalk. Photo by Alan Shackleton.

Under the Boardwalk in the Beach, a family of foxes has made a den for the past two years. Both years it has ended with crowds of people disturbing those foxes by taking pictures, and at least one of the baby foxes was killed — possibly by a loose dog.

“However, despite these efforts, the foxes have returned to the Boardwalk, it is their habit,” said Herzog.

Foxes tend to return to the same area, year after a year. Although both years at least one of the baby foxes is killed, the fox family will still likely deliver it’s new baby kits under the Boardwalk sometime this month.

“We have an approximate time of when kits should arrive, which is the end of March,” said Herzog.

TAS and the bylaw enforcement team have staff on-site this month on a continuous basis in order to mediate issues that have happened in past years.

According to Herzog, TAS is planning to install animal-friendly fences, which allow foxes to come and go but ensure the appropriate signage to alert people of the area. In the meantime, TAS intends to patrol the area and ask people to reframe from getting close to the den.

Dogs being off-leash is the biggest challenge for the wildlife living in the Beach area.

There is a transitionary period that is happening right now where the area is changing from off-leashed to on-leashed, according to TAS.

“We are hoping to educate dog owners on ensuring their dogs are always on-leashed, except in designated areas because it could have detrimental impacts on wildlife and communities,” said Herzog.

Unfortunately, there are incidents of humans harassing wild animals that are still happening in the area.

Herzog said people that there is a section in the city’s bylaws that prohibits people from harassing wildlife.

Public campaigns such as ethical wildlife photography are the focus for TAS this year in an attempt to educate the public and prevent the tragedies that happened to those foxes in the past two years. There have also been incidents over the past two years in which volunteers helping to protect the fox den under the Boardwalk have been threatened by people wanting to take photos or get a closer look.

“We can all co-exist peacefully with wildlife, not only for those foxes but also for all wildlife in Toronto,” said Christina Barnes from Strategic Communications, City of Toronto.

For past stories on the Boardwalk foxes, please read the following: