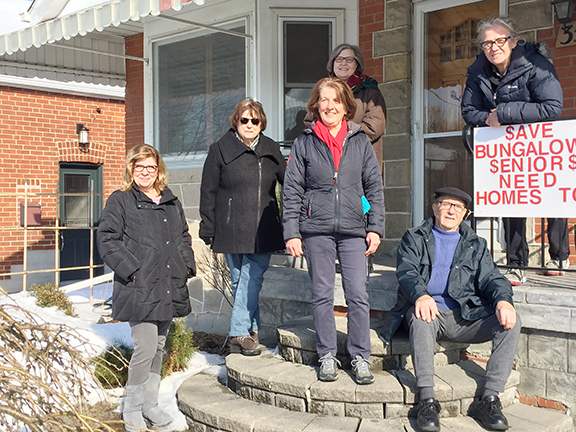 Residents on Woodmount Avenue in East York are concerned by the increase in 'monster' homes in the area, which they say are pricing out the more affordable bungalows on the street. Photo: Submitted.

The residents of Woodmount Avenue in East York are in the process of forming a neighbourhood association in an effort to better contest the construction of larger dwellings in their neighbourhood.

Woodmount Avenue, running between O’Connor Drive and Plains Road., is a neighbourhood consisting of mostly seniors living in bungalows.

Connie d’Alessandro, a longtime resident and one of the spokespeople for the proposed neighbourhood association, said that these “monster” homes on the street threaten not only the current residents, but also future first time homeowners by removing affordable housing options.

“Affordable housing means not getting rid of what you got that’s useful to first-time buyers and seniors,” said d’Alessandro of the bungalows on the street.

“A lot of the houses around my neighbourhood have been turned into two and three-storey homes so we’re basically eliminating more affordable homes because housing is hardly affordable for anybody right now.”

There are seniors living in 15 of the 24 bungalows on d’Alessandro’s block who are afraid that they will be forced to relocate due to the larger dwellings. Some residents, such as d’Alessandro, who have recently retired are feeling particularly vulnerable especially with the hardships they have had to deal with during the COVID-19 pandemic.

“If we keep raising the bar as to what’s allowed, eventually we’re eroding the very foundation,” said d’Alessandro.

The options to relocate aren’t very appealing to d’Alessandro and the rest of the association either.

“Baby boomers, and me being one of them, are part of the equation for the next 10 to 15 years and we’re going to need housing,” said d’Alessandro.

Beaches-East York Councillor Brad Bradford said there is a need for more affordable housing in Toronto and variety in the size and types of developments is one of the many proposed solutions.

“While we have the need for more housing, we also need options in between the single-family detached home or shoebox starter condo,” said Bradford.

“If we want to ensure that the dream of home ownership does not remain intangible for the next generation, the Missing Middle actually plays a role in creating more opportunities for households to get onto a property ladder that’s increasingly out of reach. No one policy or built form is going to fix the affordability crisis. For many, renting will continue to be the preferred, or only affordable option.”

Bradford said the city is looking at a number of different ways to deal with the affordable housing challenge including types of housing being built.

“On the built form side, as we continue to contend with the current housing market in Toronto and beyond, the city is pursuing a wide range of initiatives to ensure we are doing what we can to increase both the affordability of housing, as well as the housing options available.”

He noted the efforts being made to include affordable housing units in the construction of new residential developments on property owned by the city.

“This is an example of the many layered approaches it will take to make real action on the housing file. It’s not simply about replacing single storey dwellings with condos, that just isn’t feasible or effective.”

Building larger homes on streets with small houses leads to more people and more cars, which increases traffic and parking issues that already exist in the area, said the Woodmount residents.

“It’s impossible to get into our driveways because it’s like the DVP in rush hour on our street,” said Louise Beaulieu-Steiner, a resident of the street since 1991 and an owner of two properties in the neighbourhood.

The existing infrastructure can support the needs of Woodmount Avenue residents, but the larger dwellings threaten that balance, she said.

“Our driveways are made for three or four cars and we can pull in and park and we’re not blocking anybody,” said Beaulieu-Steiner. “Those people in those big houses south of us are parking on the street and they’re stuck in snow banks.”

The current bungalows on Woodmount Avenue take up around 900 square feet and are being dwarfed by the proposed ‘monster’ homes.

“The traffic is going to be affected. Our views, our sunlight, and the community is totally going to change, said d’Alessandro.

Mariangela Fazzolari, who moved to the neighbourhood last June and who lives next to a larger dwelling in question, would have reconsidered moving in had she known of the development plans.

“I moved in here because I’m a widow,” said Fazzolari. “I lost my husband. And so, this was just my dream home. But now I have interference with where I had hoped to spend my last days and I’m really upset about that. If I knew that that was going on, I would have never bought this house. I never would because it’s right next door to me.”

The residents of Woodmount Avenue don’t want to stand in the way of progress and growth, what they want is more say in the types of developments being constructed.

That sentiment is shared among the other residents.

“We all accept there will be change,” said Beaulieu-Steiner. “But we do not accept that it has to be foisted upon people and displacing people and making it unaffordable for people.”

To that end, the residents of Woodmount Avenue are appealing last summer’s decision to go forward with the construction of the house next to Fazzolari.