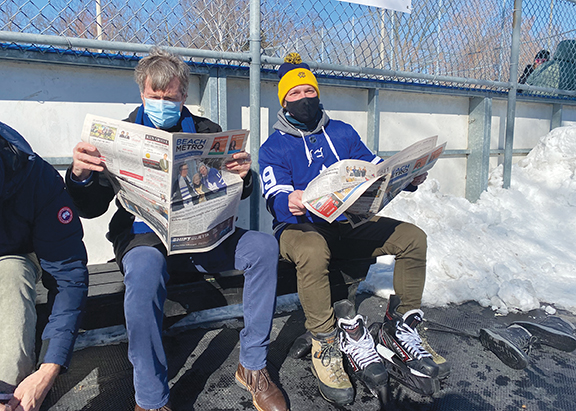 Mayor John Tory and Beaches-East York Councillor Brad Bradford look at a past edition of the Beach Metro Community News during a Family Day weekend skating event at the Kew Gardens rink. Photo by Susan Legge.

Tory was at the Kew Gardens rink for the Family Day weekend skating party hosted by Beaches-East York Councillor Brad Bradford. While there, Tory looked through a past edition of the paper featuring both he and the councillor at the same event back in 2020.

The mayor also took the time to comment on the importance of community newspapers in Toronto and how much of a supporter he is of Beach Metro Community News.

“I like the fact that it profiles so many people because in the end, what are we? We’re a community,” said Tory. “It wouldn’t matter about all the streets and all of the names and all the names of neighbourhoods if it wasn’t for the people who lived there.”

He said keeping the sense of community among residents is especially important in a city as large as Toronto.

“I think in a big city it’s often harder for people to know who their neighbours are, neighbours in the broadest sense, not just the people next door. If we want to keep the city together, it being so diverse and so big, local news—and people being written about is really important. Things that are happening being brought to people’s attention, that’s why it matters a lot.”

Stories about local residents and issues is what Beach Metro Community News is all about, though the number of papers with a similar mandate across Toronto is shrinking rapidly. And that loss of local journalism is a concern for the mayor.

“The news business generally has changed such that you now have great big news organizations that cover international, maybe national, and maybe a big city story if you’re lucky,” said Tory. “But the kind of neighbourhood stories that need to be told, they need to be told both because there are people that deserve the profile, and they are the ones not being seen enough.”

Why is Tory is such a supporter of Beach Metro Community News?

“I’ve seen in Beach Metro that you’ll talk about a famous crossing guard, famous in the neighbourhood; or a person who’s turning 100 years old. These are local stories. They just don’t get covered anywhere, really, and so local is important because that’s where the people are,” he said.

“They say everything is local, and people care most about where they live and who their neighbours are and what’s going on with their neighbours. So I think these are the places where those stories are chronicled, and they are very important stories.”

Tory congratulated the paper on its 50th anniversary and expressed the hope that it will continue proud and strong for another 50 years and more as local journalism is so important.

“Just keep doing what you’re doing because it’s obviously working. First of all because you’re still here,” he said while lamenting the loss of other community papers in the city. “There’s so many media outlets, and you say this with regret, but there’s so many media outlets that are gone. They’ve just disappeared. And with them went a lot of local attention, local coverage, local profile, local learning.”

In recognition of Beach Metro Community News’ 50th anniversary, the paper has been recognized by Mayor Tory and Members of Toronto City Council with a congratulations letter. It reads:

“For the past five decades, the Beach Metro Community News has kept community residents engaged and informed on local news in the city.
“Local newspapers are the backbone of journalism and provide crucial local information to residents about their community.
“Since 1972, the Beach Metro Community News has played a critical role in delivering information to the residents of the Beach(es), East York and West Scarborough areas of our city.
“We are grateful for the important local journalism that the Beach Metro Community News has provided this special part of Toronto as a non-profit and non-partisan community newspaper.
“Thank you for sharing the stories of our citizens and our communities and contributing to the public discourse that helps shape these treasured neighbourhoods.
“Congratulations to the team and my best wishes for continued success.”