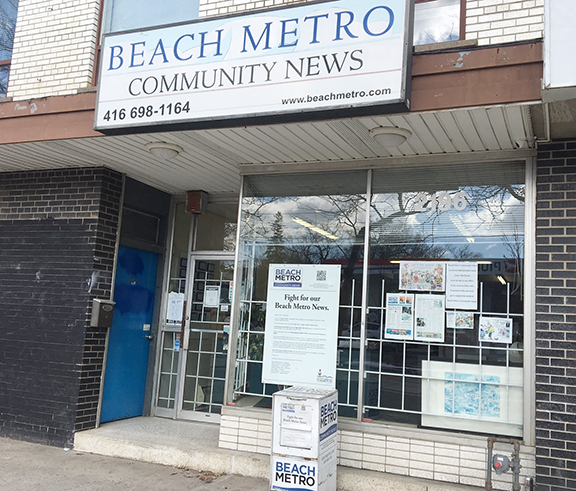 Beach Metro Community News celebrates its 50th anniversary with the March 8 edition. Editor Alan Shackleton writes about the importance of local journalism in his In My Opinion column.

I am extremely honoured to be in the editor’s chair for the 50th anniversary edition of Beach Metro Community News.

I have been working at community newspapers for most of my journalism career, which started in the summer of 1985. This is my third major milestone celebration in community newspapers. I was editor of The Scarborough Mirror for both its 40th and 50th anniversaries (in 2002 and 2012).

I believe deeply in the importance of local journalism. Neighbourhoods, small towns, suburban communities (what have you) are all stronger if they have their own local newspaper.

We provide the way for people to talk to each other, listen to each other, learn about each other, help each other and organize together to take action when change is needed. Local journalism absolutely makes communities stronger.

Given that we live in times in which it is hard to know what to believe anymore, a source of news that you can trust has never been more important.

The journalism in this newspaper is produced by people. We’re people you know and people you can talk to. We’re not guided by algorithms, political agendas or the need to produce “click bait”.

Sometimes we’re not perfect. Sometimes we may print things you don’t agree with. Sometimes we may report on stories you think are ridiculous and not report on stories you thought were important. And that’s fine. You know who we are and where we are, and you can discuss it in person with us. We’re not hiding behind fake social media accounts and pretending to be anything other than what we are ­— which is your local newspaper.

And that has always been the spirit of this newspaper since it’s very first edition back on March 1, 1972 as Ward 9 Community News.

“The impetus to start a local paper was the lack of community coverage by the main media. People wanted to know what was happening in their own neighbourhood, and what their politicians were doing,” wrote Sheila Blinoff, who has been with the paper since May of 1972, in a column recognizing the beginning our 50th year last March.

A key concern in 1972 was the plans for the Scarborough Expressway which would have devastated local neighbourhoods.

“In the east end the proposed Scarborough Expressway would follow the rail line along Gerrard down Coxwell and link up with the Gardiner. The initial plan called for demolishing 1,200 homes, later changed to 706 in this neighbourhood,” explained Sheila. “What better way to rally the citizens of Ward 9 and keep them informed and ready to act, than their own newspaper? (In 1971 the Spadina Expressway was cancelled, in 1974 the Scarborough Expressway was cancelled, and then it was curtains for the rest.)”

That’s the advocacy and leadership that set the tone for this newspaper.

As editor now, I am forever grateful to Sheila (who was general manager for 40 years and still serves as a special advisor on the volunteer Board of Directors) and to Joan Latimer, who was editor for 22 years and retired in 1995.

They set the tone for what we are doing here and how we’re doing it. I just follow the roadmap they provided.

There are many others who have also dedicated themselves to the paper in the last 50 years, but I do not want to turn this into a listing of names as I fear I will miss someone by doing so.

What I want readers to know is that this paper is the culmination of hard work by a lot of people, most of them volunteers.

The role of volunteers here is crucial. We are a non-profit run by a volunteer Board of Directors made up of community members. That means two things, and both of them I consider to be positives.

First, we do not have to meet the financial expectations of private owners or stockholders. That is the reason so many newspapers are closing down across North America.

Second, being non-profit means we can turn to our community to help us in times of need. And, readers, that time is now.

If you value local journalism, I urge you to support us. Please become a Beach Metro Community News Supporter by going to https://beachmetro.com/donations/support-beach-metro-news/

Bravo Alan. An excellent and moving column. Keep up the good work, it means a lot and achieves a lot.