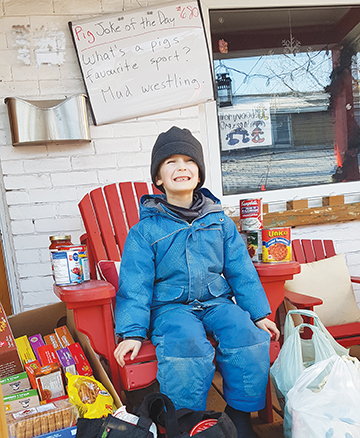 Grayson Clifford, with the joke of the day behind him, is helping to raise the spirits of neighbours and also donations for the Daily Bread Food Bank. Photo: Submitted.

It all started during the first COVID-1919 lockdown in the spring of 2020.

Like many Torontonians, a daily walk in the neighbourhood was simply a way to get through the boredom, and each day Grayson Clifford, age four, would go for a walk with his parents, Robyn and Eric.

A regular stop on their route was a nearby home that had a daily joke posted. After a while the daily jokes became less frequent, and Grayson asked his parents if their home on Norwood Terrace could be a “Joke House”, too.

Every day since then (and 675+ different jokes later) the family faithfully posts a new joke on a whiteboard prominently located on their front porch.

And every day, many neighbours pass by and stop to read the joke. Most of the jokes are from joke books, the Internet, etc…, but there have been a few originals thrown into the mix, including several special ones by Grayson, who is now six years old.

Last month, the family decided to harness the local following for the jokes and collect donations for the Daily Food Bank. The campaign started on Feb. 14, asking the community to leave non-perishable food in a bin outside the Norwood Terrace Joke House.

To wrap up the drive on Feb. 27, Grayson (with help from his parents), hosted a two-hour Hot Chocolate Stand, inviting people to come join the food drive.

As neighbours and school friends stopped by, there was a real community feel. Best of all, the community came together and helped Grayson raise $609 and 210 food items.

Not bad for a kid just wanting to joke around.