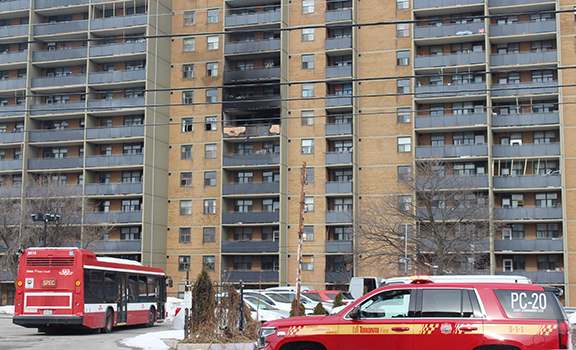 Emergency crews are dealing with a three-alarm fire at an apartment building at 10 Macey Ave. today. Damage to balconies and units in the area of the sixth floor can be clearly seen. Photos by Alan Shackleton.

One person has been taken to hospital with unknown injuries after a three-alarm fire at a highrise apartment building at Macey and Danforth avenues in southwest Scarborough this morning.

Fire crews were called to the building at 10 Macey Ave. just before 10:30 a.m. on Wednesday, Feb. 16 for reports of a fire on the sixth floor.

Severe damage to a number of apartment balconies facing Danforth Avenue was visible after the fire was put out. Numerous residents in the large building were standing outside, and buses had been sent for those who were feeling cold.

It is not known if the building (the Macey Avenue Apartments) was completely evacuated, as power still seemed to be on in a number of units and elevators were working.

Police had Danforth Avenue, between Victoria Park and Pharmacy avenues, closed while clean up of the area continued.

It is not known at this time if there were any other injuries in the fire.

The cause of the fire is also not known at this time.

Police are asking motorists to avoid the area as there still a large number of emergency vehicles on both Danforth, Macey and Denton avenues.