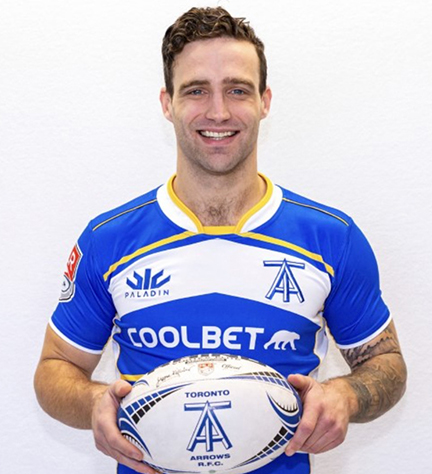 Conor McCann, 28, who grew up in the Beach area and played for the Balmy Beach Rugby Club, recently signed on to play with the Toronto Arrows pro rugby team. Photo: Toronto Arrows.

Now 28, McCann earned numerous honours as a young rugby player with the local team and has continued his involvement with the sport while also working as a firefighter in Toronto.

Standing at six-foot-one, 205-pounds, he is an excellent athlete, in top shape. He has been described as a well-rounded back, and a good kicker.

The Toronto Arrows were formed in 2018 and they compete in Major League Rugby, which is a 13-team North American pro league.

“Playing for the Arrows is a tremendous honour and it is awesome to have a professional club in my hometown. I know it will help grow the game and get people involved like never before. I am enjoying the opportunity to do what I love in the city I grew up in,” said McCann.

The Arrows had a preseason match against Old Glory DC on Friday Jan. 21 in Virginia.

McCann had an excellent game for the Arrows in that contest and was named the winner of the Old Glory DC Clonakilty Man of the Match award. The award is presented from Old Glory to a player on the opposing team who plays very well and does not shy away from the physical aspect of the game.

Growing up in the Beach area, McCann said the Balmy Beach Rugby Club played an important role in his athletic career.

“Balmy Beach has been extremely important to me as a rugby player and a person. I am extremely fortunate to have had many great mentors growing up, along with the generosity of my community in helping me to achieve some rugby goals,” he said. “I wish to continue this for the youth players in our club well into the future.”

In 2014 then also in 2015, McCann helped the Balmy Beach Rugby Club win the McCormick Cup, which is the senior men’s club rugby championship of Ontario.

“Rugby has given me many great memories. But it’s the opportunities it has given me and the ability to travel and see the world while experiencing different cultures that is really the most memorable, places like Dubai, South Africa, Australia and Chile,” he said.

In 2015, while playing a game with Balmy Beach at Fletcher’s Fields in Markham, McCann also helped save a teammate’s life by performing CPR with a defibrillator that was the at the fields. The teammate had taken a hard hit, struggled to breath and his heart stopped. So perhaps it is no surprise that McCann would go on to be a firefighter with Toronto Fire Services.

During the pandemic, McCann has been keeping active and in shape through a number of activities including putting together exercise routines for his family.

McCann, his mother, his siblings, and their partners would come together two or three times per week to do sprints and lift weights (all while observing COVID-19 safety rules).

The Toronto Arrows began their 2022 regular season on Feb. 6 with a 21-8 loss to the Seattle Seawolves.

The Arrows also played the Los Angeles Giltinis on Feb. 11. The result of that match was a 31-16 loss for the Arrows.

The first home game for the Arrows, which will be played at the York Lions Stadium at York University, is set for Saturday, April 2, at noon against Rugby ATL (Atlanta).

For more info on the Toronto Arrows, please go to https://torontoarrows.com/