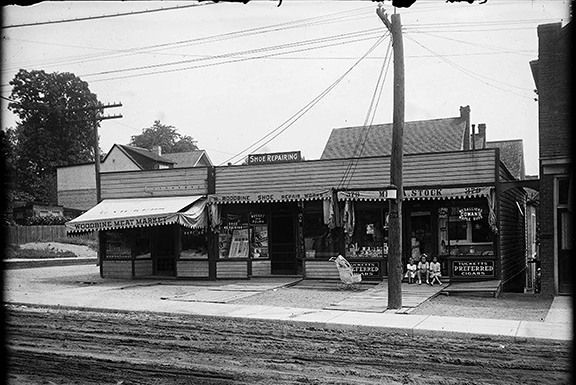 Look at the merchants that used to be on the southeast corner of Woodbine and Corley avenues, between Kingston Road and Gerrard Street East.

There was once a meat shop, a shoe repair shop and store there that sold cigars and other items.

The above photo was taken in 1921. Thanks to Mhairi Kerr for emailing me the image. EDITOR’S NOTE: Since these photos appeared in the Feb. 8 print edition of Beach Metro Community News, Barbara Myrvold of The Beach and East Toronto Historical Society has been kind enough to share some information about the stores that were once located on Woodbine Avenue.

Using the 1921 Toronto City Directory she located the businesses located on or near the southeast corner of Woodbine Avenue and Tomlin Avenue. (Tomlin Avenue is now called Corley Avenue.)

Myrvold said the Toronto City Directory for 1921 can be viewed online at http://archive.org/details/torontodirec192100midiuoft/page/494/mode/2up

Also, she said city directories are an excellent source of information about people and places in Toronto at any given point in time and they can be viewed through the Toronto Public Libary’s website at https://www.torontopubliclibrary.ca/history-genealogy/lh-digital-city-directories.jsp

Beach Metro Community News thanks Barbara Myrvold for the research above on the Woodbine Avenue businesses in 1921.