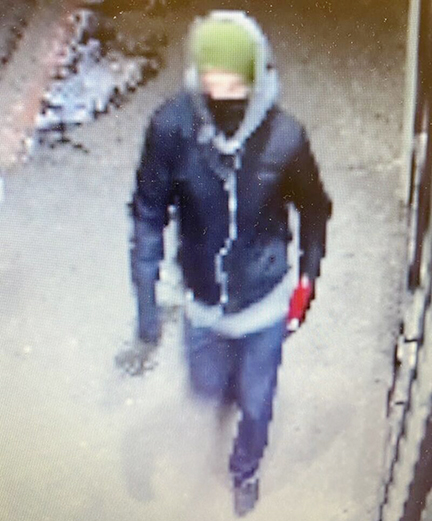 Toronto police have released this image of a suspect wanted in connection with the smashing of a storefront window in a Cliffside plaza early on the morning of Monday, Jan. 10.

Toronto police have released an updated security camera image of a suspect wanted in connection with the smashing of a storefront window in a Cliffside plaza last month.

The window smashed was at the constituency office of Scarborough Southwest MP and Minister of Emergency Preparedness Bill Blair and took place early on the morning of Monday, Jan. 10.

According to police, an individual repeatedly struck the window pane with a hammer and shattered the glass at approximately 3:56 a.m. on Jan. 10.

The suspect was last seen walking westbound along the plaza’s storefronts. The plaza is located on the south side of Kingston Road between Ridgemoor Avenue and Cliffside Drive.

Toronto police were unable to confirm that the smashed window was at Blair’s constituency office as they do not release specific information identifying crime victims. However, the office’s front window was covered with plywood after the incident and the security video released by police shows a Canadian flag in the window being smashed which is consistent with what was hanging in Blair’s constituency office window prior to Jan. 10.

The individual sought by police is described as wearing a full face covering with a grey hoody and green hat pulled over, a black or blue jacket, black or blue jeans and black sneakers with some white on them.

The incident is being investigated as mischief under $5,000, police said.