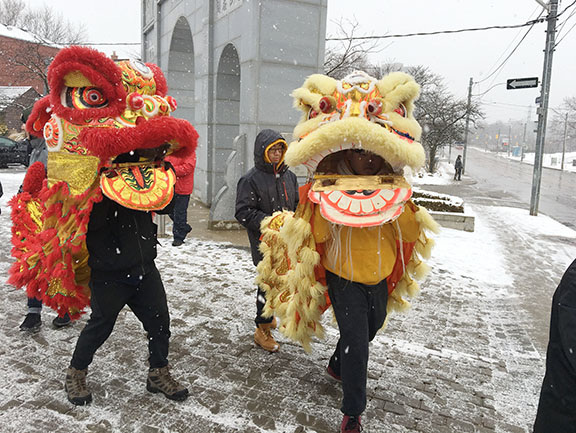 A Lion Dance Parade is slated for Toronto's East Chinatown on Sunday, Feb. 6 as part of Lunar New Year celebrations.

On Feb. 1, 2022, Asian countries such as Vietnam and South Korea celebrate the Lunar Year, while the day has a special meaning for people of Chinese descent as the Lunar New Year also marks the beginning of their new year.

“It is one of the most important festivals in the Chinese community,” said Angela Chan, President of the Chinese Cultural Centre of Greater Toronto. Wherever there are Chinese people, there will be a celebration of the Lunar New Year. They may not be in China, they may be in Malaysia, India or anywhere else around the world.”

There are some customary activities before, during, and after celebrating the New Year which can last as long as two weeks in some places.

Many who celebrate the Lunar New Year will clean around the house and rid themselves of things they don’t need in anticipation of the New Year and to make room for new items and experiences.

However, brooms are not used to sweep during this time as it could mean that you’re sweeping away their good fortune!

Shoes are also not usually bought at the beginning of the Lunar New Year as the word for shoes in Chinese can also mean hardship.

The first days of the Lunar New Year also hold a special meaning according to Chan.

“The first day of the new year is spent with family,” said Chan. “The second day you go out and visit further, like the second round of relatives, not in your immediate family. Then on the third day, you just go out to the restaurants and eat.”

Food is also an important part of celebrating the Lunar New Year, many referencing the double meaning and symbolism of certain words in Chinese.

Fish are eaten as they represent abundance and the hopes that everyone eating together will soon meet again. Lobsters, known as the dragon of the sea, are eaten to transfer their energy and power and symbolize good fortune.

“We have a dessert that’s called Tangyuan, which is a sort of sweet dumpling,” said Chan. “It’s got either rice, like rice wine water, or sugar in water and sometimes they have black sesame in it.”

The round dumplings signify togetherness, and they are eaten to ensure a smooth and peaceful new year.

Locally, there is an outdoor celebration planned by the East Toronto Chinese Chamber of Commerce that will be attended by Toronto-Danforth Councillor Paula Fletcher on Sunday, Feb. 6 at noon. The event returns to East Chinatown after being cancelled last year due to the COVID-9 pandemic.

The celebration will begin at the Chinese Arch (Zhong Hua Men) located in the parking lot by Gerrard Street East and Hamilton Street. There will be Lion Dancers who will walk throughout East Chinatown with members of the Chamber and Toronto-Danforth political representatives visiting several local businesses to bring the good luck and well wishes for the New Year.

If you plan to attend, Fletcher encourages residents to support East Chinatown businesses by shopping and eating locally and wishes all those celebrating a safe and happy Lunar New Year.

Feb. 1 also marks the start of the Year of the Water Tiger, the last of which was in 1962. The name of the year comes from one of the 12 Zodiac animals combined with one of the five Taoism elements (metal, water, fire, earth, wood).

“This year the Tiger is also known as the Black Water Tiger because they associate the colour of water with black,” said Chan.

The tiger represents strength and prestige and solitude, while the water signifies growth similar to the way trees use water to grow according to Chan.

The Chinese Cultural Centre of Greater Toronto also has a virtual event planned for Feb. 7. The event will be streamed live at 8 p.m. on their website.

“This year our virtual event is very special because we have received funding from the Ontario government,” said Chan. “We call this the Spring Festival celebrations. It’s not only about Lunar New Year, we are also celebrating the reopening of the City of Toronto, and of the province as well.”

The activities planned virtually this year hope to replicate the feeling of past celebrations where hundreds would gather including traditional Chinese music, singing and dancing as well as arts and crafts for both children and adults.

“We have invited the masters and instructors to come and demonstrate their craft, which will include paper cutting, paper folding, origami, and also vegetable carving,” said Chan.

“We also have calligraphy of course,” said Chan. “Calligraphy is a major factor in the Lunar New Year because our calligraphers will write these well-wishing couplets that people like to take them home hanging on the wall or something for the rest of the year.”

There are also plans to visit the Toronto Zoo to witness the three tigers, as well as to drive through the major Chinatowns in Toronto to help revitalize these areas in preparation for the lifting of restrictions on gathering.

To attend the Chinese Cultural Centre of Greater Toronto on Feb. 7 at 8 p.m., please visit http://www.cccgt.org/year-of-tiger/.