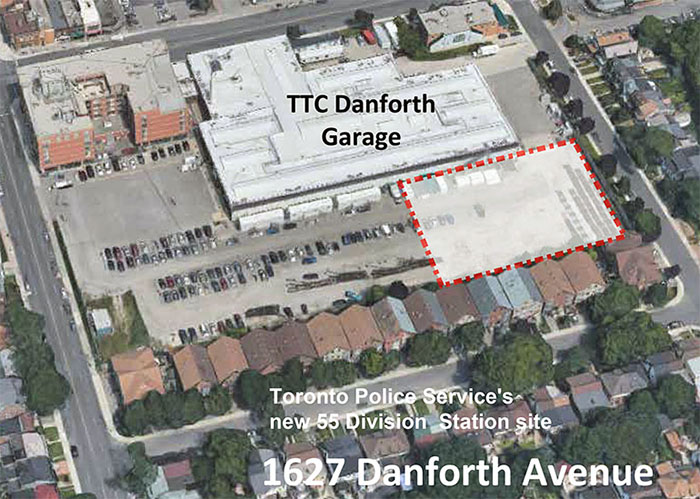 A virtual Town Hall Meeting hosted by the Toronto Police Service (TPS) and local councillors Brad Bradford and Paula Fletcher will be held on the evening of Monday, Jan. 24, to update the East Toronto community on the design and status of the future 55 Division Station as part of the Danforth Garage Master Plan on Danforth Avenue east of Coxwell Avenue. The area outlined is red is where the police station is expected to be located on the site.

A virtual Town Hall Meeting hosted by the Toronto Police Service (TPS) and local councillors Brad Bradford and Paula Fletcher will be held next week to update the East Toronto community on the design and status of the future 55 Division Station as part of the larger Danforth Garage Master Plan.

On Monday, Jan. 24, from 6:30 p.m. to 8 p.m., police will unveil the design for the new 55 Division Station at 1627 Danforth Ave., just east of Coxwell Avenue. The construction will take approximately three years, with occupancy expected in the final quarter of 2026.

The Danforth Garage Master Plan is a framework to improve and revitalize the Toronto Transit Commission’s Danforth Garage site. Surrounded by Danforth and Woodrow avenues to the north and south and Coxwell and Hillington avenues on the east and west, the Danforth Garage sits on 2.0 ha (5.02 acres) of real estate recognized for its potential post renovation.

Since the TPS have the budget for their end of the project, development will start with them. However, police are not the only organization that will be accommodated in the new development lands.

In addition to the police station, the Toronto Public Library (TPL) as well as the Toronto Transit Commission (TTC) both have been identified as anchor tenants for the future development as both have historical ties to the Danforth Garage.

The Danforth-Coxwell Library at 1625 Danforth Ave. was established in 1988 is located in its existing two-storey building.

The TTC acquired the property, at 1627 Danforth Ave., in 1921 first to be used as a car house, then upgraded to be able to store fuels and other necessities as well as maintain buses in 1967. Despite moving the majority of its garage functions in 2002, it is currently used as the TTC Traffic Office, which will continue and will be incorporated in any future renovation of the site.

Tobias House, a non-profit organization that provides housing and personal support services to people with physical disabilities on 695 Coxwell Ave. will also remain on the property and will designate up to 130 of their below grade parking spaces for TTC use.

There are also plans involving the garage itself with one plan advocating for keeping the old structure while the other calls for demolishing the garage and constructing other buildings in its place. Both plans place an emphasis on public space with an urban square, garden park, a multi-use court, as well as an atrium. Care is also being given as to how pedestrians and vehicles navigate in and around the new development.

The site has also been identified by the city’s Housing Now initiative as a location for affordable housing in the area. Housing Now is a city-led initiative aimed at increasing the supply of new affordable rental housing within mixed-income, mixed-use, and transit-oriented communities in Toronto.

The community is welcome to attend the Jan. 24 Town Hall Meeting and provide feedback. For more information, please go to http://www.torontopolice.on.ca/d55/