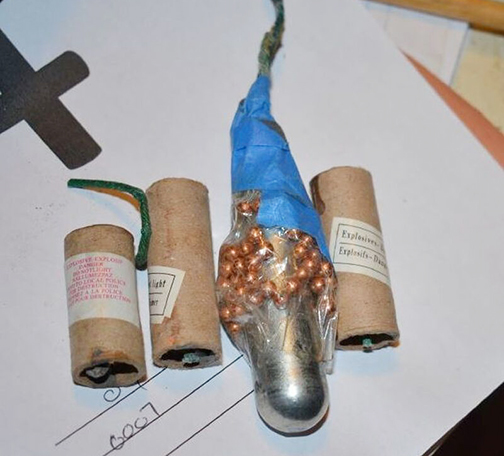 Toronto police released these photos of explosive devices allegedly found during a search warrant earlier this week. The investigation into the incident began in the Leslieville area on Monday, Jan. 10, police said.

A 39-year-old man is facing numerous charges, including two counts of possession of an explosive device, in connection with a police investigation this week that began in the Leslieville area.

According to Toronto police, officers began a firearm investigation in the area of Queen Street East and Leslie Street on Monday, Jan. 10.

As a result of the investigation, search warrants were issued for a vehicle and a local address. With the assistance of the police’s Emergency Task Force and Toronto Police Dog Services and the Public Safety Response team, those warrants were executed and a number of items including five explosive devices were allegedly discovered.

Police said that along with the five explosive devices, two of which were allegedly homemade, other items discovered in the search were airsoft guns and a crossbow.