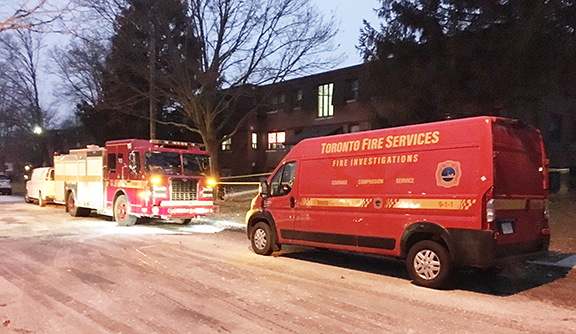 A woman believed to be in her 60s has died after a fire in a building on Pell Street in Cliffside early on the morning of Monday, Dec. 27. Photo by Alan Shackleton.

A woman believed to be in her 60s has died after a fire in a low-rise building in Cliffside early on the morning of Monday, Dec. 27.

Emergency crews were called to the building on Pell Street, southwest of Kingston Road and Midland Avenue, at approximately 1:40 a.m. today.

When firefighters arrived they discovered flames on the second floor of the building and began evacuating residents.

During a search a woman in her 60s was found with vital signs absent and pronounced dead.

Some other residents were reportedly treated for smoke inhalation at the scene.

The Ontario Fire Marshal’s office is investigating the cause of the fire.