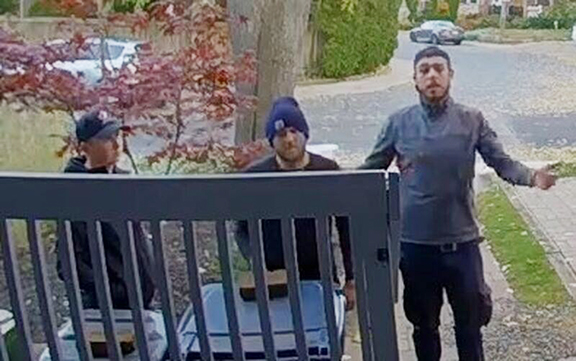 Toronto police are looking for help identifying these men in connection with an investigation into an alleged chimney repair fraud in the Broadview and Danforth avenues area.

Toronto police are asking for the public’s help identifying a number of men in connection with an investigation into an alleged fraud in the Broadview and Danforth avenues area.

According to police, officers from 55 Division were called to the Ellerbeck and Butternut Street area on Thursday, Dec. 2, regarding the alleged fraud.

Police alleged that on the afternoon of Nov. 15, a group of men were in the area knocking on the doors of houses telling residents they needed to make repairs to their chimneys. Police alleged that the men said they worked for a company called TJ and Sons Homecare, but they did not provide paper quotes, business cards or receipts.

The men then allegedly demanded cash payments from the residents, police said.

Multiple men attended the homes to do the work on the chimneys and police alleged they caused more damage than existed before.

Police are seeking the public’s help in identifying the men and have released a number of photos. To see more photos, please go to http://torontopolice.on.ca/newsreleases/51763

Residents are also being warned by police that if they are contacted by people soliciting such services, then they should contact police.