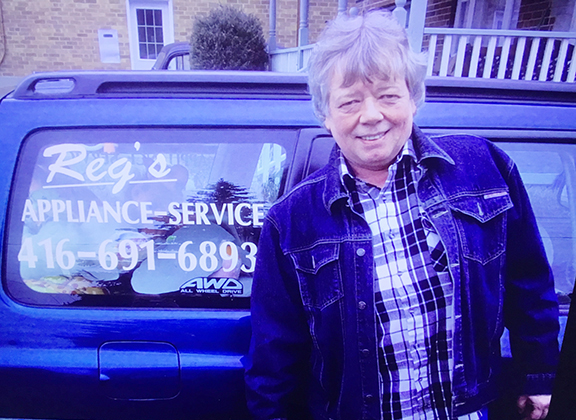 Reg Little of Reg's Appliance has been in business for 44 years, and has been advertising with Beach Metro Community News for the past 43 years. Above is a photo of Reg with one of his service vehicles from approximately 2016. Inset photo shows Reg and his daughters Amanda and Suzie at one of the many Toronto Beaches Lions Club Easter Parades that he took part in. Photos: Submitted.

Reg Little of Reg’s Appliance has been repairing East Toronto residents’ machines for almost 44 years, and he says he has no plans to ever retire.

Reg has also been an advertiser with Beach Metro Community News for 43 years, almost as long as his business has been around. That makes him one of the paper’s longest continuous advertisers, which is something to celebrate in the 50th year of the paper.

Reg said he’s always had a talent for fixing appliances and since his father was a refrigeration technician, he was learning about the job from a young age.

When Reg was older, people started to bring around their broken-down cars for him to fix at his family’s home in southwest Scarborough.

“I took all the technical courses in school and I was the go-to guy to fix everybody’s car. My driveway at my parents place would look like a garage because everybody would bring stuff to me to fix,” he said.

After that, Reg became the youngest technician ever to be hired at Xerox Canada but said he was coerced into leaving six months later because he didn’t fit the company mould.

Reg said he dabbled around in other avenues before he started fixing his mom’s friends’ appliances.

“I got myself an old van, and took out an ad in the Beach Metro newspaper in October ’78 and said I’d see what happens. And I haven’t looked back since,” he said.

Months later, Reg decided to open a store on Kingston Road where he’d sell appliances and provide repairs to residents.

“When I first started I was hanging doors, fixing doorbells, doing every handy little thing that people were putting off or couldn’t do,” he said.

Around 1981, Reg was bunking down in his store when an electrical fire started in the middle of the night, unfortunately engulfing it in flames.

“I regrouped forces, kept the ads going, and kept the business going and did some sub-contracting on the side. I carried on and built it back up. The store was too much to handle so I just stuck to the service,” he said.

In the following years, Reg continued to run his business and had two children. He also started a band that played at events such as the Canada Day Festival in the Beach and the Scotiabank Toronto Marathon as it ran through local neighbourhoods. “We’d decorate the car with all these rabbits and everything, and one year it was on television. I would wave to 2,000 of my closest friends,” he said.

Today, Reg is back living in his childhood home, a journey that he says has come full circle.

Reg has fixed appliances for numerous Beachers in the years he’s been in the business, including repairing a dishwasher for Peter Keleghan who plays Terrence Meyers on the television show Murdoch Mysteries.

“People say I’m a jack of all trades, but no — I’m a master of all trades. I don’t need a plumber, electrician or any technician. I do it all,” he said.

Over 43 years, Reg said he’s seen pretty much everything when it comes to working on appliances and other repairs. He said the world of service has changed considerably since he started his business.

“Back in the day when service calls were like $20 or $30, you would go out and you would assess a situation, this is before the Internet. Nowadays, service calls are like $150,” said Reg.

He said he finds out everything he needs to know about the unit and the problem to know exactly what he’s dealing with and what parts he needs, and provides residents with quotes over the phone.

Reg continues to advertise with Beach Metro Community News in order to let the community know about the services he provides.

“I like to keep busy and I like to be able to provide my regular customers that I’ve dealt with over the years with an honest service, and there’s no one else doing it. There’s no one else advertising for appliance repair in the Beach Metro,” he said.

“All I can say is the appliances today are not made to be repaired. The manufacturer would rather have you replace them.”

Today, Reg keeps repairing appliances when he’s not staying at his condo in Florida and running music jams.

He includes his phone number and email in his Beach Metro Community News classified ads for any resident looking to contact him about repairs.

“If anybody wants to email me, I do what I can to provide them with the information necessary.”

To contact Reg about appliance repair and his services, email reglit@yahoo.com