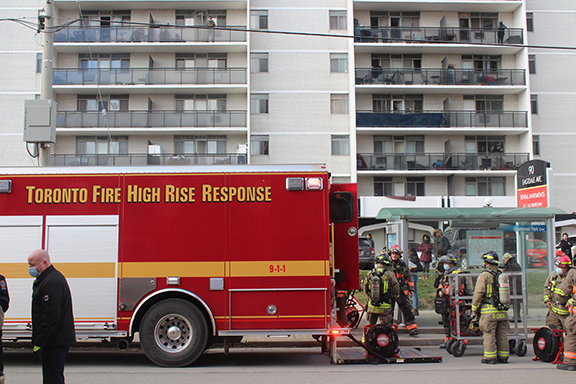 Toronto fire crews at the scene of an electrical incident at 90 Eastdale Ave. on the morning of Friday, Dec. 3. Photo by Alan Shackleton.

Power is expected to be restored to an East York apartment building later today after an electrical fire on the morning of Friday, Dec. 3.

Toronto Fire was called to 90 Eastdale Ave. just before 10 a.m. for reports of smoke.

When fire crews arrived they discovered a problem had taken place in the highrise building’s electrical room.

Fire crews did not have to extinguish that problem as the building’s electrical system shut itself down and turned off breakers automatically. However, some arcing of electricity from the building’s main electrical panel was reported.

With power off, and smoke on the upper floors, many people decided to leave the building.

A TTC bus was at the site Friday morning for residents seeking warmth.

Fire crews were in the process of clearing smoke from the building late Friday morning.

Toronto Hydro spokesperson Russell Baker said power to the building is expected to be restored by approximately 3:30 p.m. today (Dec. 3).

Yea it is Dave, take a picture and send to Councillor Bradford and Mayor Tory with c.c. to the CBC and Provincial Fire Marshal

Never got solid electricity till half way through January here at 90 eastdale!!
🙁