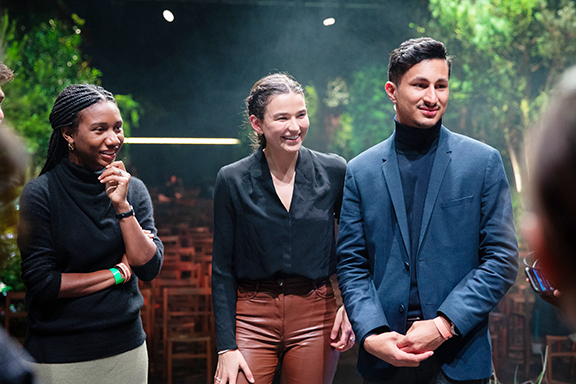 Living in Toronto this winter has made it quite difficult to ignore the effects of climate change on our environment. With sandals still an appropriate footwear choice in Toronto almost right up until the arrival of the snow, coupled with the recent flooding in British Columbia which saw thousands displaced, climate change is at the forefront of many conversations.

That was certainly the case at COP26, the United Nations climate change that took place in Glasgow, Scotland in November. The goal of the summit was to create new standards that move the world closer to the 1.5 degree target set with the Paris Climate Agreement.

Johnstone, a Queen’s University graduate who grew up in the Beach and graduated from Malvern Collegiate in 2015, works with Kite Insights, a research and strategic communications agency which is a content partner to The New York Times.

“We supported them with the research and writing of the program,” Johnstone said.

Generation Climate was created with the intention of going beyond including young people as part of the program simply for the sake of inclusion.

It instead focused on integrating the perspectives of younger people into the climate discussions. The hope is to create more diversity within the leadership of climate change conversations.

The Generation Climate group consisted of 18 young people who, over the past nine months, contributed and collaborated with one another to propose sessions that would be part of The New York Times programming.

The Times rented out SWG3, a studio warehouse normally used for concerts, and transformed it into a conference centre for the duration of COP26 in Glasgow.

Each Generation Climate member contributed to the sessions with their own expertise. Individuals approached the conversations from different viewpoints—geographical, entrepreneurial, etc…

On the other hand, a platform which promotes a nuanced conversation with people possessing a variety of skills and ideas serves the collective mission in a very positive way—that was what Generation Climate aimed to do.

Although many believe the final outcome of COP26 was not aggressive enough, Johnstone’s silver lining is that the summit further applied pressure on companies and governments to do their part in reaching the global climate target.

An example of this pressure is the climate march that occurred during the summit. Organized by Fridays For Future, it was “one of the largest global climate strikes in the world” said Johnstone.

“Regardless of what happens within these negotiations, change doesn’t always happen in those spaces,” she said. “Change can also happen from very large groups of very angry people.”

“The caveat to that is we also need systems that support women in politics,” she said. “We need less harassment in the political state.”