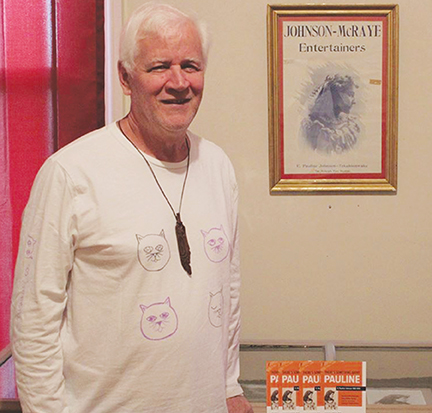 Jim Gibson with a poster for one of the performances by poet Pauline Johnson. Photo by Amanda Gibb.

Johnson, also known by her Mohawk stage name Tekahionwake, was born on the Six Nations on the Grand River territory near Brantford, Ontario, in 1861. She was a talented writer and poet of Mohawk and English descent.

She began writing following her father’s death in 1884 to help support her family. After a successful poetry reading in Toronto in 1892, she spent the next 17 years touring North America and gaining international recognition.

Gibson, recently retired after working for the Art Gallery of Ontario for 27 years, said he started to collect books around five years ago when he started visiting Vancouver more often.

“I started collecting Northwest Pacific Indigenous books…for the first while, I was getting other stuff, but after a while I must have gotten a Pauline Johnson book and when you see something like that you go ‘wow,’ and you want to read and collect it,” said Gibson.

He said initially he got some of Johnson’s works from rare book stores and antiquarian dealers in Vancouver.  In Ontario, he frequents David Mason Books, D & E Lake Ltd., Minotavros Books, and online antiquarian sites.

“I started to think this sounds like I’m bringing Pauline home, so why don’t I just call it that?” he said.

Since his donation, Gibson said that Brant Public Library has tentatively agreed for him to do a display next year and that he will honour his plan to “bring Pauline home.”

Gibson has also put Pauline Johnson’s books on display at the Old Hastings Mill Store Museum in Vancouver, Pauline Johnson Collegiate in Brantford, and has also donated to the Six Nations Public Library on Chiefswood Road.

“I tell everyone these books are not for circulation…some of them are from 1913, they’re for educational purposes only or for lectures,” he said.

Locally, Gibson teamed up with The Great Escape Book Store at 957 Kingston Rd. and he contributed to a window display earlier in the summer. Gibson said the early edition of Flint and Feather was donated to the store.

“My whole intention was to bring people in and so someone could win an early edition of a Pauline Johnson book,” he said.

Gibson said that although he has a personal interest in Johnson’s books, he has other reasons for purchasing copies.

“I purchased so many that I’m at the point where I can say I’m going to keep the best ones, but there are some here that I feel should be returned, I guess you could say, back to their rightful owners,” he said.

It was mentioned that I have donated to the Six Nations Public Library, but in reality I have not. However I will do this in the New Year in “my quest to bring E.Pauline Johnson-Tekahionwake home.”
Thanks Beach Metro Community News,
James Gibson