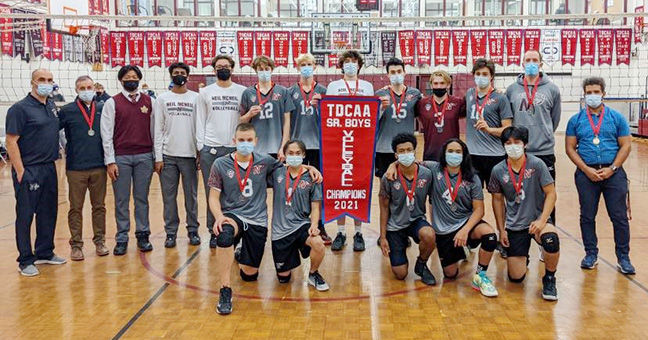 The victory marked the fitth consecutive Senior boys TDCAA championship for the Neil McNeil’s volleyball programDue to COVID-19 rules implemented by the Toronto Catholic District School Board (TCDSB) banning overnight trips for school teams, that will be it for volleyball competition for the Neil McNeil squad this season. Though there will be Ontario Federation of Schools Athletic Association (OFSAA) championships taking place over three days in Kingston, Neil McNeil will not be participating.

Though his team knew that playing at OFSAA was not going to be an option this year, said head coach Dave Egan, they still worked hard to make the most of their Toronto season and continue Neil McNeil’s championship legacy in the sport.

“We knew at the start of the year that OFSAA wasn’t going to be an option for us but we told the boys they still have a great opportunity to continue the strong legacy of volleyball at the school. The boys took that message to heart and really made the most of what was available to them,” he said.

The team had an exceptional season, winning all four of their league matches and their four playoff matches without dropping a single set.

“The goal of the program is twofold,” said Egan. “We want to win medals at OFSAA and also want to send as many athletes as possible to play at the post-secondary level”.

Although the OFSAA medals were off the table for this year the second part of the program goals are a success. Grade 12 captain, Michael Hickey, as well as Grade 12s Benjie Hoole and Marcus Radkte-Hotton, are all being recruited by universities across the country, said Egan.

“I’m especially proud of the way our Grade 12s played this year. They are one of the most talented classes we’ve had here and they lost two full high school seasons because of COVID. I’m really happy they finally got the chance to play again.”