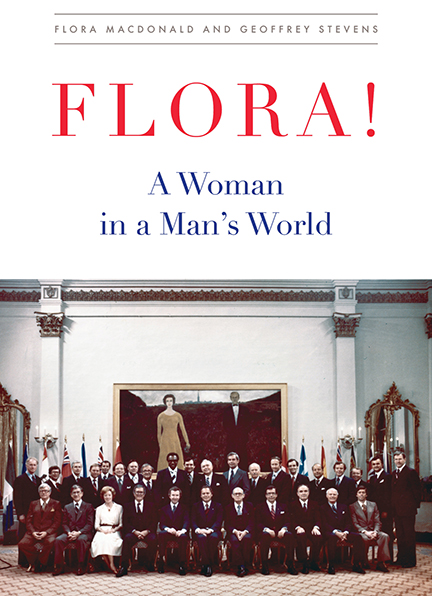 The posthumous memoir Flora! A Woman in a Man’s World was written with the help of journalist and author Geoffrey Stevens.

The posthumous memoir is titled Flora! A Woman in a Man’s World and was written with the help of journalist and author Geoffrey Stevens, a former Beach resident.

Stevens, former political columnist and editor of the Globe and Mail, reached out to MacDonald to write this book before her death in 2015 at the age of 89, hoping to bring to light just how much of a trailblazer she was for women in politics. Her family asked him to complete the book after her death.

As well as being the first woman to be named Canada’s Minister of External Affairs, MacDonald lived a life that spanned continents and saw her call countless communities home, including a stint as a Beacher.

MacDonald lived in a house at the top of Lee Avenue in her late 20s.

Though she didn’t spend too much time in the community, her niece Linda Grearson, said that the community stayed with her.

“She unfortunately couldn’t stay here too long. She was bitten by the travel bug and had to move around,” said Grearson, who herself has been a Beach area resident since 1987. “But we’d sometimes have lunch here when I lived in the area, and it’s always a neighbourhood she’d come back to.”

MacDonald’s successes as External Affairs minister in Clark’s government are well documented — from the Iranian hostage crisis and Canada’s role in helping American hostages escape in 1979 to her award-winning work during the Vietnamese refugee crisis.

“Right before she passed, on the 40th anniversary of bringing over the Vietnamese immigrants, the community here asked her to speak at an event,” said Grearson. “They all still remembered her. We didn’t know if she was going to be able to attend, let alone speak at the event, but she did it anyway.”

Even when she wasn’t holding a cabinet position in the federal government, her impact was felt. She was ground-breaker for Canadian women in politics while serving as the Member of Parliament for the riding of Kingston and the Islands from 1972 to 1988.. She pushed to amend language in the Charter of Rights, granting women equal representation.

To this day, female members of the House of Commons are given the same title as their male counterparts – “Honourable Member” as opposed to “Honourable Lady,” – a change that MacDonald introduced.

But what often isn’t documented, and what this book gives readers insight into, are her humanitarian efforts around the world.

She was boots-on-the-ground to an extreme. When someone envisions a former federal minister, the imagery that pops up rarely entails someone sleeping in a tent in rural Afghanistan, but MacDonald routinely broke norms.

“Once politics left her, there were no more five-star hotels, so she lived with the people, played with the children, slept on their floors, taught mothers to read, write, and raise children in cold climates,” said Stevens.

“She travelled rough, with a tent or sleeping bag, and sometimes had to nestle up beside a river for a night.”