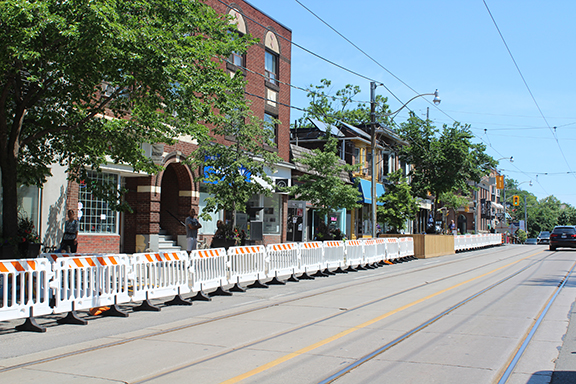 Toronto Council has voted to make the CafeTO program permanent in the city. Here additional restaurant patio space is shown along Queen Street East in the Beach earlier this year.

I’m writing this column after a long second day of what has grown into a three-day city council meeting that started on Nov. 9. While proceedings were to continue after Remembrance Day, council already made three significant decisions propelling Toronto forward.

Those decisions were introducing a new small business property tax class to lower the tax burden on our local businesses by 15 per cent; making CaféTO patios permanent every summer; and introducing inclusionary zoning (IZ) so that new developments are required to include affordable housing.

In my three short years on council, there’s been a lot to learn about city hall. One lesson stands out tonight as I write this column: When making big policy decisions Toronto is often weighed down by decades of inertia.

The debates of the week brought the ghosts of councils-past very much to the present.

This policy – used across North America – requires a certain percentage of homes in new development to be set at affordable rates. Council has formally asked the Province of Ontario for IZ powers no fewer than seven times since 1999.

IZ laws were passed in the closing days of the Kathleen Wynne government. Premier Doug Ford came in shortly afterwards and set restrictive parameters on where and how the policy can be used.

The City of Toronto looked at three years of market data, ran hundreds of financial models, and talked with thousands of people to design the policy that council approved. That approach will require up to 22 per cent of units in new condominium developments in Toronto’s most rapidly growing areas to meet the city’s definition of affordable housing by 2030.

This is an incredible improvement on the current system where the city has next to no authority to require affordable homes in new developments.

But still IZ is being criticized by some who don’t agree with the policy’s phase-in approach. IZ will start relatively modestly, initially requiring just 5 to 10 per cent of new homes to be affordable before ramping-up to a higher percentage over time.

Like anyone else, I love the concept of immediately having 20 per cent (or more) of all new housing units being affordable. But it’s just not an actionable policy – largely because IZ relies on market development to deliver new affordable units.

Requirements that ramp up too quickly are very likely to cut off projects that are currently being developed. Fewer projects means fewer IZ units and less housing overall. Both undermine affordability.

The phased approach is designed to give developers, landowners and investors time to adjust to the new requirements. Experience from almost a thousand other municipalities – and economics – shows that these requirements will slow the inflation of land prices and temper expectations of high returns on new projects. By starting slowly, we’ll make sure the existing pipeline of projects keeps flowing while steadily building more affordable units.

Had the province given Toronto IZ powers in 1999, we’d likely require as much as 22 per cent of new housing to be affordable (maybe more). Cities like New York, which in some areas have requirements up to 40 per cent, have had their policies in place for more than 30 years.

Unfortunately, this just isn’t our reality. The inertia of the past – and where we are today because of it – ends up detracting from the success of the present.

Toronto’s efforts to support small businesses is a similar story. The small business tax class council just approved was only possible with a long called-for change in provincial rules.

For years now, members of this community have been acutely aware of the toll disproportionate property taxes take on our main streets.

Through my work as the small business lead on the mayor’s COVID Task Force, engaging with thousands of business owners across Toronto, advocating with cabinet ministers at the provincial and federal levels, we helped build the case that now is the time to support local businesses through tax reform.

The province only announced the new tax class in its 2020 budget with final details released in early 2021. Toronto moved at lightning speed to design a program that will save mom and pop businesses around $27 million next year by asking larger commercial businesses to take on a relatively modest increase.

Had previous generations of council done more, we might be further along in our vision for stronger, more sustainable main street economics. Detractors have been quick to point that out.

But it’s hard to say this council – in the middle of a global pandemic – could have gone much further than the main street transformations we’ve seen across Toronto.

In the big debates, it’s easy to push certain narratives as if we can somehow travel in time or make transformational changes at a starting-point we could – and probably should – be at already.

But these are false notions. We can only start from where we are today. If we’re going to keep moving forward with smart, bold decision-making then we need to see beyond the rhetoric.

We should stop getting in our own way with battles of a past we can’t control.

Let’s move onward and forward. We all know there’s still work to do.