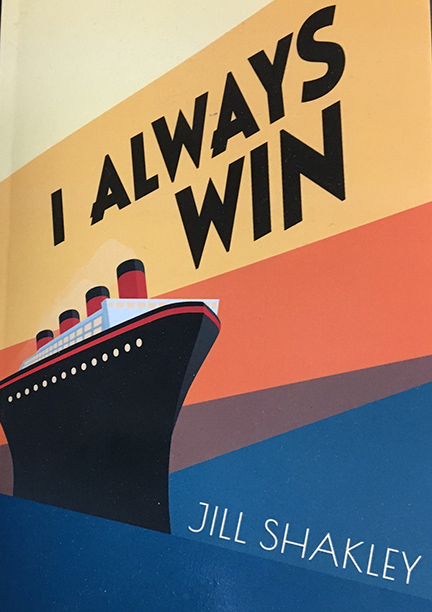 I Always Win is the creation of the writing team of Jill and James Shakley. The book is released under the author name of Jill Shakley.

Jill and James Shakley met at a coffee house called The Unmuzzled Ox back in 1967—two years before their marriage. A graduate student new to Canada with not many familiar faces around, Jill took up a dishwasher position at the establishment which was located at the University Of Toronto campus in an attempt to meet new people.

As luck would have it, her soon-to-be husband frequented the same coffee house to play Bridge in its basement with his friends who attended the university.

“I walked in, met James, and we’ve lived happily ever after,” Jill said.

The couple has since lived in James’ childhood home in the Beach where among other things they collaborate on humorous novels that are mainly based in 1930s England where James was born.

The duo, who release novels under the pseudonym Jill Shakley due to James’ desire to be a silent author, seems to have mastered the art of combining married life with an artistic partnership.

“James has got the plot-mind, so he thinks up most of the plot,” Jill said.

James’ plot is then passed back and forth between the two writers with each adding onto and elevating the other’s ideas. The process is routinely broken up by mild arguments sparked by artistic differences that naturally come about.

“Fairly often, we’ll end up fighting about it,” Jill said as she laughed. “But there’s quite a lot of discussion about it.”

They have successfully written 10 books together, the latest release titled I Always Win.

The latest book’s plot revolves around a young adult, Rodney Goodale, who is too financially unstable to begin a book that he wants to write. Rodney, desperate for stability, accepts a job as the valet to a very eccentric gentleman and accompanies him on an oddly adventurous ocean voyage.

The release of this book comes at an appropriate time. With the world plagued by a global pandemic, many young adults find it difficult to pursue their artistic desires due to a lack of financial stability.

Without giving away too much of the story, Jill sparked interest in the novel by revealing that “it has an odd plot.”

Fans of the late British author, P.G. Wodehouse, the couple’s work had been, in the past, misunderstood by some publishers. Luckily, they found FriesenPress, a British Columbia based publisher that gives them artistic freedom and control over their work.

“What we’re trying to do is to write light-hearted adventure stories,” Jill said.

I Always Win was inspired by Shakley’s desire to elevate their characters—some of which had already been introduced in a previous release, Three On A Match.

“But also, James, I think, had an intriguing plot twist,” Jill said. “So the book was sort of written around that.”

Proud residents of The Beach, they’ve chosen Book City on Queen Street East as the only place, locally, that I Always Win can be purchased.

However, the novel can also be bought through online book retailers such as Amazon.

They are currently working on their next release, The Bearded Queen.