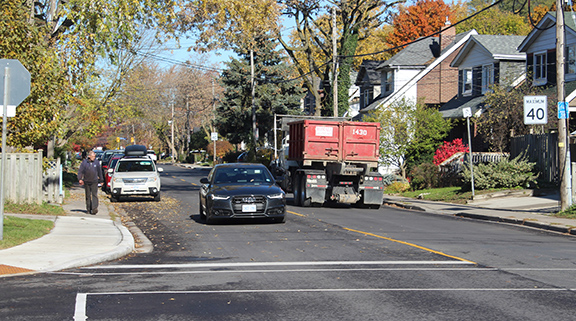 Residents said have been experiencing speeding along Main for decades, but it has become much worse since the section of road was repaved and the bus route was removed.

“The intersection at Main and Doncaster is very dangerous with people not following the basic stop sign rules,” said Barb Kelly, who is a Main Street resident.

Community members said that on many occasions they are forced to yell at the drivers of the cars to slow down, and they are afraid there will be crashes. “There have definitely been near misses and one person claims of knowing someone that was hit by a car at Main and Doncaster. Another witnessed a young 14-year old girl being hit at the same intersection,” Kelly said. “She did recover, but that wasn’t enough for the city to take action?”

Residents said they contacted the police to ask them to set up a speed trap or install a radar camera. However, since Main Street is considered a “rescue route” used by emergency vehicles, this can’t be done, the residents said.

Calls for traffic calming have also been made to the office of Beaches-East York Councillor Brad Bradford.

“Road safety is my top local priority. In the last three years I have approved and installed more than 100 new road safety measures on local streets in Beaches-East York, including everything from speed humps to new pedestrian crossing signals,” said Bradford.

Main Street’s classification as a “minor arterial” road, however, means that some of the tools the city can typically use to slow traffic cannot be implemented, he said.

“That means that some of our usual road safety interventions like speed humps aren’t available,” Bradford said.

In the meantime, the city gave an option to reduce speeding by allowing for parking on both sides of Main Street between Lumsden and Doncaster. This means that it will narrow the roadway and will force drivers to slow down.

Residents have a mixed reaction to this idea, said Kelly.

Many are suspicious this option is being presented so the city can benefit from the extra income of double the on-street parking permits.

“Some think it would be annoying and hard to navigate, snow removal would be impossible, and others love the idea to slow down traffic and to give us more parking and better access to loading dogs and kids in our cars,” said Kelly.

In order to start with this parking-on-both-sides-of-the street option, it is necessary to create a petition along the street and if there appears to be enough support, the city will then organize a mail-in vote for affected residents.

If that vote approves the parking proposal, Toronto-East York Community Council would likely back the change.

Bradford said he has also asked city staff to look at other measures to slow traffic along Main Street in the area.

“I will be bringing a motion to lower the speed limit on this stretch of Main Street to 30 kilometres-per-hour at the next meeting of the Toronto and East York Community Council on November 24,” Bradford said.

The current speed limit on Main Street between Lumsden and Doncaster is 40km/h.

Also, Bradford said he will be working with Toronto police to make sure timely and thorough enforcement is happening.

“Lowering the speed limit is a helpful and important tool in improving road safety but it still requires people driving to take individual responsibility for everyone’s safety,” said Bradford.

Main Street residents are hoping that by raising awareness of this issue, drivers will take responsibility and indeed consider everyone’s safety.

“Drive responsibly! This is a no-brainer! Enforcing the speed limit should be the priority!” Kelly said. “Would you speed like that on your street?”