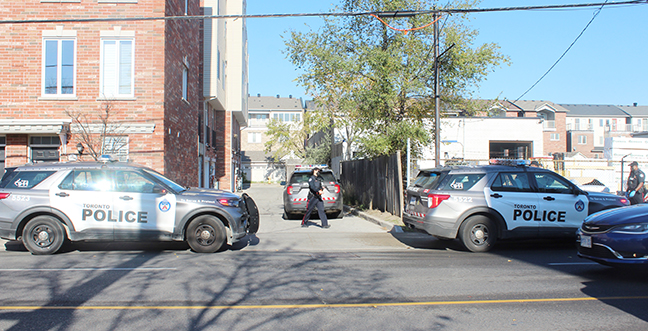 Police investigate on Gerrard Street East near Fairhead Mews, east of Main Street, on Monday morning after a traffic stop of a vehicle resulted in weapon and drug charges against two 18-year-old men. Photo by Alan Shackleton.

Two 18-year-old men are facing a number of weapon and drug charges after police stopped a vehicle in the Upper Beach area yesterday morning.

According to police, officers conducted a traffic stop of a vehicle with two occupants in the area of Gerrard Street East and Fairhead Mews, east of Main Street, at approximately 10:30 a.m. on Monday, Nov. 8.

Police alleged that officers located marijuana in the car. Upon further investigation, a firearm, ammunition, and other drugs suspected to be crack cocaine, cocaine and Psilocybin were also seized, police alleged.

Nicolas Morales, 18, of Toronto, and Finn Woodley, 18, of Peterborough County, face a number of charges including possession of a loaded regulated firearm and possession for the purpose of trafficking.