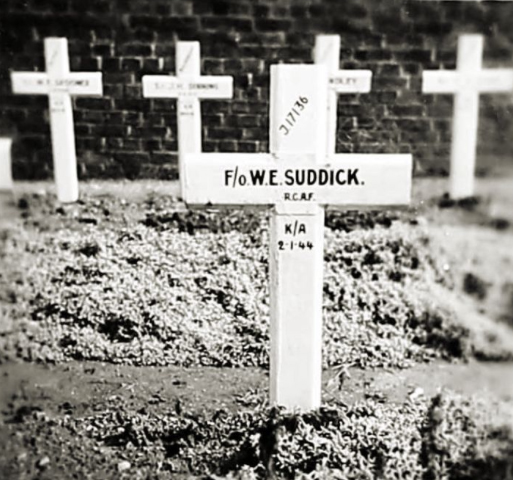 Beach Metro News cartoonist Bill Suddick remembers his Uncle Bill who was killed in January of 1944 when his Lancaster bomber was shot down. Shown is the marker for his grave at Grosselies Communal Cemetery in Belgium.

I never knew my Uncle Bill, the forever-young man I was named for.

I knew from conversations with my grandparents, uncles and my dad that Bill was in the Second World War. I learned he was interested in drawing and airplanes, and coincidentally, so was I.

He was a North Toronto kid who worked part-time at CKCL, a now defunct radio station, where he did a little bit of everything including production and announcing sports.

Like many other kids I built lots of model planes but my pièce de résistance was the Avro Lancaster, which was Uncle Bill’s ride.

When I was a teenager I heard that he was badly wounded in one of the many raids over Nazi Germany. My grandmother once mentioned casually that Bill had been left with a few souvenirs in his leg, metal splinters, the result of a night fighter attack. The doctors had been able to remove the bigger bits but those pesky, smaller shards had been deemed too difficult to get to. He was thankful he could still walk, albeit with a very painful limp, according to his letters.

I had also heard vague anecdotes from other family members that Bill had earned a DFC (Distinguished Flying Cross) and gone back for a second tour of duty, and then a third.
“I thought you could go home after doing two tours. Was he crazy?” I asked incredulously.

I had always assumed that serious wounds, a “Blighty,” as they were called in the First World War, would allow a combatant to sit it out. Not so in the Second World War. Like so many others, he convalesced for a while, did some instruction duty, and then went back to doing the job that nobody wanted.

With the advent of the online world I started researching my uncle’s flying career more seriously. I discovered a trove of digitized information. Like-minded friends provided some leads. I was able to find news clippings, letters of reference from his principal at North Toronto Collegiate and his boss at CKCL Radio.

Something that surprised me was a letter from a medical officer that revealed Bill had freely stated he “had lost his nerve” and requested that he be removed from active duty. Regardless, he somehow found the resolve to go back.

I find it very difficult to fathom how these young guys were able to handle the stress that weighed so heavily on them. I marvel at how they found the courage to go up, night after night, knowing full well they only had a 50 per cent chance of survival.

There is quite a bit of information online about Lancaster DV308’s final trip over Berlin. In addition, I have an excerpt from the pilot’s personal diary. One of four surviving crew, Derrick Bell, from Nottingham, England bailed out and was eventually taken prisoner.

After several months on the run with fellow crewman Mark Albert, an American, and hidden by the Underground, they were betrayed and captured by the Nazis. Fortunately, the noose was tightening around Hitler’s neck. They were liberated by the Russians in May of 1945.

The first line of Derrick Bell’s diary excerpt about the operation to Berlin (in his wife’s hand-writing and faxed to my Uncle Pat in 1999) reads ominously:

“We were not happy in the fact we had a new rear gunner, a youngster of 18, still everybody must make a start, though that, rather trite truth was not a lot of comfort to the rest of us. Poor kid, we little knew at the time that it was his last as well as his first trip.”

I was even able to find the name of the German ME110 night-fighter pilot who shot down ‘V for Victor,’ my uncle’s aircraft. He was Major Wilhelm Herget. Hell, I even know his nickname ‘Der Kleine,’ or ‘the small one’ because of his stature, or so it says in The Night Air War by Martin W. Bowman.

Upon reading this information, I have to admit I felt anger bordering on rage. Why did he get to survive the war, have a family and live out his life? Over time, I could only rationalize that it was the machinations of a mad-man, Hitler, which caused the fates of these young men to intertwine over Belgium on a freezing cold New Year’s Night 77 years ago.

It strikes me that 77 years doesn’t seem that long ago for so-called ‘civilized’ nations to be bombing the hell out of each other. The RAF airmen were doing their best to stop an evil tyrant. The pilot of the Messerschmitt was ostensibly defending his homeland.

As mentioned before, Bell and Mark H. Albert, USAF were taken prisoner. So was the bomb-aimer Sgt., E.H. Harris. Sgt. F.W. Bailey, the navigator, evaded capture.
The following is from The Night Air War:

“Sergeants Laurence Fraser Somers and George Christie Connon the Special Operator, and Flying Officer Frank Joseph Zubic RCAF the 18-year-old mid-upper gunner, were killed. So too was William Edward Suddick DFC RCAF who agonizingly, was on his 89th operation. They were each laid to rest in Grosselies Communal Cemetery.”

There’s a curious, slightly eerie coincidence that goes along with this story.

Long before I had access to any of these details, I was introduced to my future father-in-law, who coincidentally was also a Second World War airman (flying Corsair fighters off Royal Navy aircraft carriers). He misheard my surname, pronouncing it “Zubic,” and continued to do so for long enough it actually became sort of his nickname for me.

Years later I was shocked to read that young Frank Zubic was onboard that same doomed Lancaster Bomber with my uncle. It was his first mission, and his last.

Why insightful words Bill. A tribute to your uncle and family. Well written.

Thanks Phil. Yup, spell-check is devious. I got the gist.

That generation of my family are all gone. Now I have to rely on the internet…, and my fading memory. It’s a good idea to write this stuff down.

I’ve been meaning to write that story for years.
Thanks for reading and commenting. Hope you and yours are well.