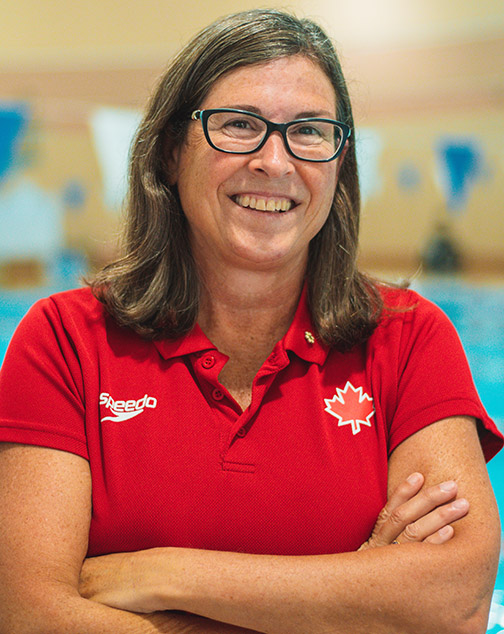 Famed Canadian swimmer Vicki Keith loves to swim and to make the world more inclusive for children with physical disabilities. As the coach of southwest Scarborough’s Variety Village Flames swim team she gets to do both.

Keith is a prolific marathon swimmer owning 16 world records and numerous other awards and honours. She has swam across many challenging bodies of water, including all five Great Lakes, and was inducted into the Canadian Sports Hall of Fame in 2019.

She always knew that using swimming, not just to raise money and awareness, but also to take an active role in helping children with physical disabilities was her calling.

“I loved being in the aquatic environment,” said Keith. “So the two pieces sort of fit together. And I wanted that to become what my passion was: working with people with disabilities in the water.”

Becoming the swimming coach at Variety Village is a perfect marriage of her two passions.

Making sports more inclusive to children with disabilities is incredibly important according to Keith, not just because physical activity is healthy but because of the camaraderie and social skills they have a chance to develop that they wouldn’t be able to otherwise.

“Fifty-three per cent of kids with a disability don’t have a friend,” said Keith. “And the numbers are likely much higher than that.”

Keith thinks that sports can be used to bridge that gap.

“To me sport is so much more than activity. It is the opportunity to have friends, to make friends, and to be part of something bigger than yourself.”

The problem is that there aren’t many opportunities for children with physical disabilities to engage in sports the way they can at Variety Village.

“What I’ve discovered is there are very few opportunities in our province or across our country for young people with disabilities,” said Keith.

“But if we compare the opportunities for able bodied athletes in sport and just activities, compared to what’s available for young people with disabilities, there is no comparison.”

The way that we approach the challenges of helping children with disabilities engage in physical activity needs to change according to Keith.

“I think we have to look beyond accessibility and look at inclusion,” said Keith. “And people get those two words confused all the time. Accessibility is about doors, ramps and things like that. Inclusion is opening your brain to possibilities.”

Keeping an open mind and educating people on how to engage with children who feel like outcasts due to their disabilities is crucial according to Keith.

“So I think about a young man that I coached at the Y who used a power chair for mobility and a letter board for communication,” said Keith. “And he would go up to somebody and try and get their attention to ask them a question. And they would pretend he doesn’t exist.”

The neglect wasn’t malicious according to Keith, but because many aren’t prepared to, or have the capability, of empathizing with children that need that level of attention and support.

“It was a challenging conversation for them,” said Keith. “And they were embarrassed that they wouldn’t be able to do it well. And so rather than face their embarrassment, they would not address that young person.”

Her swimming and coaching career instilled in her patience and determination and Keith knew that she could use sports in general, but swimming in particular, to reach these kids in ways they needed but weren’t accustomed to.

“I realized what I wanted to do is help build something really important in our province,” said Keith. “Which is developing programs for kids with physical disabilities.”

Keith had been in the Variety Village family for 40 years, and even mentored some of the coaches at Variety Village and knew that is where she wanted to develop that program.

“I couldn’t think of a better place to do that than at Variety Village,” she said. “The puzzle pieces just fit together.”

Keith doesn’t just love swimming, she enjoys the challenge of completing swims many dismiss as impossible. It’s why she chose the butterfly to swim across the English Channel battling the ice cold water and large waves.

“I have this strong belief that nothing is impossible and not putting restrictions,” Keith said.  “So I swam butterfly across the English Port Channel.”

“I was the first person to do so.”

Keith’s love of swimming and accomplishments is matched by her philanthropic pursuits related to children with physical disabilities and to date she has raised more than $1 million.

Much like swimming, Keith’s desire to help children with physical disabilities began at a young age.

“I started volunteering when I was very young,” said Keith. “My family felt it was important that we give back to our community. When I was at the Y (YMCA) in Ottawa, I started to volunteer with a swim program and my responsibilities were to help a young person with a disability within his swimming lessons.”

It was during this time that she realized the positive effect swimming could have on children with physical disabilities.

“I remember lifting him into the water,” said Keith.  “And the way his eyes would light up, and the freedom the water offered him…he had restricted movement on land, he used a wheelchair for mobility, he could crawl but he couldn’t walk.”

“I realized that water was freedom,” Keith said.

As great as Keith’s swimming legacy is, and as much money she has raised, helping children transcend the limits of their physical disabilities in the pool might be the most gratifying.

“Water is the equalizer,” she said. “People can run and move in the water and have a freedom in the water that is not as available to them [on land].”