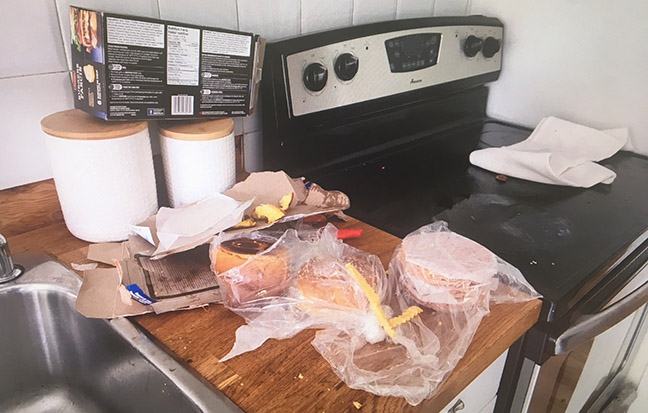 Photo above shows food in the kitchen of the East York house for sale that seems to have become the site for a party by some young people. Inset photos show alcohol bottles on a table, and fries on the floor of one of the rooms. These photos were taken by a local realtor who came across the young people as he prepared to show the house to prospective buyers on the morning of Saturday, Oct. 23.

Police are investigating after a local real estate agent reported an encounter with a number of young people who had allegedly broken into an East York home that was listed for sale.

The incident took place at approximately 10 a.m. on Saturday, Oct. 23.

The realtor told Beach Metro News that he was in the process of showing the home to prospective buyers when he found approximately 10 young people, both boys and girls, inside the house. The house has been unoccupied while being listed for sale, and was staged with furniture and other items.

The realtor said the young people appeared to have been having a party in the house, possibly the night before and into the Saturday morning. There was evidence of food including French fries and hamburgers being made in the kitchen, and also empty alcohol bottles — Crown Royal seeming to be the drink of choice.

Photos of damage to some items of furniture, the empty bottles and food on the kitchen counter were taken by the realtor and shared with Beach Metro News.

A phone video shot by the realtor of young people scrambling out of the house when they were confronted was also shared with police and Beach Metro News. Due to the possibility of some of those shown in the video of being young offenders, Beach Metro News has decided not to include the video with this story.

In the video, one group of about seven young people flee quickly from the house and can be seen running down the road.

However, one young man who has most of his face covered slowly goes into a couple of rooms to collect some items he had brought with him before leaving the house. That young man was wearing a black hoodie with what appeared to be an image of Homer Simpson on the front. The realtor said he suspected something might have been going on when he was unable to open the front door of the house with the key he had, and instead had to enter through the back with his key to that door.

Detectives assigned to the 54/55 Division area of East York told the realtor yesterday that they are investigating the incident as a case of breaking and entering. Police also told the realtor that the house may have been entered through a window.