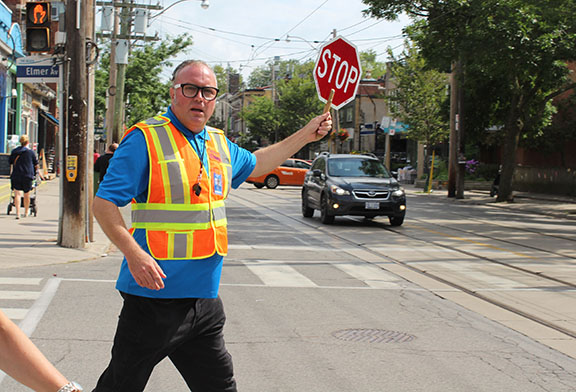 Paul Belyea, the popular crossing guard who helps Kew Beach Junior Public School students safely across Queen Street East, is asking for the public’s help in locating his backpack which was stolen while he was doing his job yesterday (Oct. 21) afternoon.

His red and black Swiss Gear backpack was stolen some time around 4:05 p.m. from one of the school’s fence poles on which he had looped it.

Along with his wallet, which contained cash and his ID, there was also a cellphone, laptop and some personal journals with very important information in his backpack, he said.

Belyea has reported the incident to police, but at this time he appealing to the public to see if anyone has found the backpack and can return his personal items – most importantly the Mac laptop and the journals.

“I am devastated by this loss and cannot comprehend how anyone would perpetrate such a crime while I am involved in community safety,” he said.

Belyea was working his regular crossing at Elmer Avenue and Queen Street East.

“I hold out hope that my personal effects can be returned,” he said. “I am calling on all Beachers to keep an eye out for that red and black Swiss Gear backpack.”

The person who stole the backpack may have just taken cash from the wallet and then dumped it somewhere in the neighbourhood, so Belyea is asking residents to be on the lookout for it.

“Maybe it landed in someone’s backyard or under a hedge. The personal effects and writings are the more important and deeper loss. Money is money, but the other stuff really hurts.”