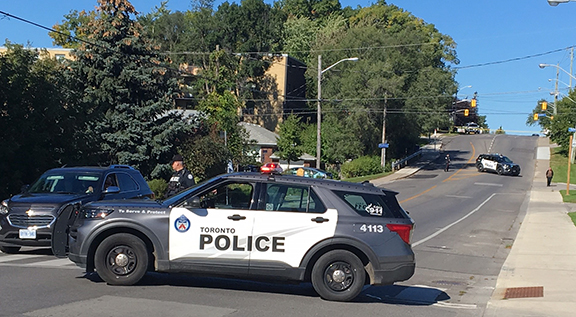 Police closed Birchmount Road near Danforth Avenue on Oct. 19 after a 17-year-old Birchmount Park Collegiate Insitute student was struck and killed by the driver of a vehicle in the intersection.

The driver of a minivan that struck and killed 17-year-old Birchmount Park Collegiate Institute student Nadia Mozumder earlier this week has been charged with careless driving causing death.

The charge was announced by Toronto police earlier this morning (Oct. 22) and is laid under the Highway Traffic Act. The 40-year-old woman driver from Oshawa has also been charged with turn not in safety.

According to police, the minivan driver was turning left from southbound Birchmount Road onto eastbound Danforth Avenue when the vehicle struck Mozumder who was crossing at the lights from the south side of Danforth on the east side of Birchmount at 11:45 a.m. on Tuesday, Oct. 19.

She was critically injured and died in hospital on Tuesday afternoon.

The Birchmount Park Collegiate school community was in mourning of the loss of the popular Grade 12 student, and grief counsellors have been at the school this week.

“I lost my everything,” Azizul Mozumder told CBC News and other reporters at the Islamic Research Centre Canada, where his daughter’s funeral prayers took place on Thursday, Oct. 21. “I loved my daughter so much. I’m going miss her for the rest of her life.”