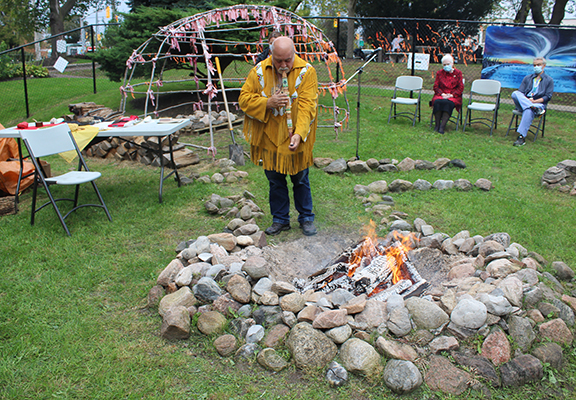 Elder Little Brown Bear, Director of Aboriginal Education, Programs and Culture and The Aboriginal Healing Program at Michael Garron Hospital in East York, leads a pipe ceremony in front of a sacred fire as part of an Oct. 20 service for everyone who has been impacted by COVID-19. Inset photo, Ontario Lieutenant Governor Elizabeth Dowdeswell signs the Intentions Board. Photos by Alan Shackleton.

A memorial and condolence service for everyone impacted by the COVID-19 pandemic was held this week at the Bear’s Den All Nations Traditional Sweat Lodge which is located on the grounds of Michael Garron Hospital.

The Oct. 20 event consisted of a sacred fire which burned for most of the day and three pipe ceremonies conducted by Elder Little Brown Bear, Director of Aboriginal Education, Programs and Culture and The Aboriginal Healing Program at the hospital.

The pipe ceremony at noon was attended by Ontario Lieutenant Governor Elizabeth Dowdeswell.

“We are here for those who never made it home, those who have been carrying on the fight and those who made it home,” said Little Brown Bear at the beginning of the noon pipe ceremony.

“We understand the pain and grief you are feeling,” he said.

According to Toronto Public Health, 3,688 people have died in Toronto of COVID-19 since the pandemic began in early 2020.

Community members were invited to the Oct. 20 ceremony, but the bulk of those attending at noon were staff from Michael Garron Hospital.

Little Brown Bear praised the work done by those from the hospital who have been fighting the pandemic and caring for those with COVID-19 for the past 18 months.

Lt. Gov. Dowdeswell said she was honoured to be invited to attend the ceremony. She said the Bear’s Den site at the hospital was a very special place that plays a key role in helping the community.

“This is a hospital community that has so embraced the needs of its neighbours, and found a way to become a real place of healing,” said Dowdeswell.

“My sincerest gratitude to all who are healthcare workers. I have seen how very difficult it has been for so many of you, being the last contact between people and their families. We want to recognize most profoundly the efforts you have been making on a daily basis. My condolences for those we have lost in this dreadful pandemic,” she said.

Also at yesterday’s event was a large Intentions Board that people were encouraged to sign and share their thoughts about the pandemic on. Little Brown Bear said that as part of the 5 p.m. pipe ceremony yesterday, the wooden Intentions Board would be cut into smaller pieces and added to the sacred fire.

“The smoke will go up as prayers and the ashes will go to the earth,” said Little Brown Bear.