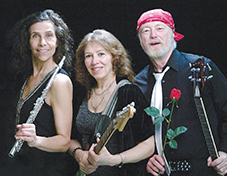 “We’re so excited to perform live again in our home territory,” said Wally Hucker, founder and bassist of local band The Two Fours of their upcoming show this week.

The roots rock revival band plays and sings this Thursday, Oct. 21, from 7 to 10 p.m., at Trecce, the Lorefice family’s Italian restaurant at 1792 Danforth Ave. between Coxwell and Woodbine avenues.

“Our last show was outdoors in The Beaches on Aug. 1, 2020,” Hucker recalled of the first day of Phase 3’s short-lived reopening. “The reception was great. Many fans, new ones and old, came to see us, after five months of cancelled and rescheduled shows.”

“People often ask,” said Gold, “’When and where are you going to play again?’ Well, now you know.”

“I’ve known the Lorefices since they opened Trecce in 2017. They are so welcoming.”

In May, Trecce was named one of Toronto’s seven best Italian restaurants by https://www.thebesttoronto.com/

The Two Fours are performing under the auspices of The Danforth Mosaic BIA, aka “The Danny,” a participant in The City of Toronto’s Amplified Live Music On Patios Pilot program. The program is a venture of the Toronto Music Advisory Committee, chaired by Beaches-East York Councillor Brad Bradford.

For more information on The Two Fours, please visit the band’s Facebook page at https://www.facebook.com/thetwofoursband/