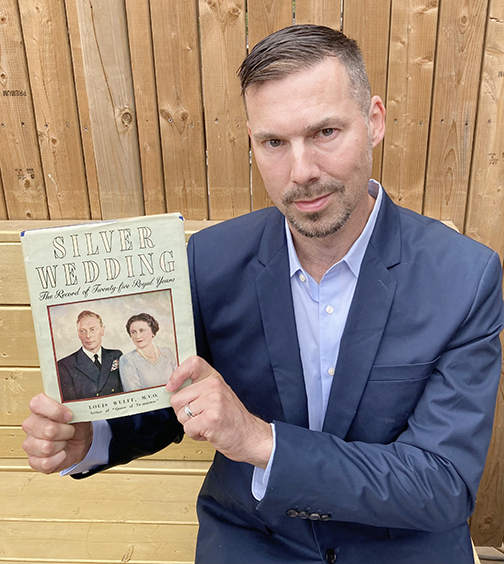 Robert Quance of Leslieville was shopping in the book section of the Value Village on Queen Street East, as he has often done, when he discovered a very rare find.

He came across a book on the Royal Family, Silver Wedding: The Record of Twenty-five Royal Years by Louis Wulff written in 1948. Without much thought Quance purchased the book.

“When I returned home and opened the book, not only did three pieces of paper fall out, but I noticed the inscription inside, ‘To Mrs. Howard Ferguson from Mary R 1948,’” said Quance.

“As soon as I saw the ‘R,’ I knew I was holding something special. ‘R’ stands for Regina, Latin for Queen,” he said.

“First, I went online to find samples of Mary’s signature and handwriting to compare and was very pleased to find they were identical. It was a very exciting and surreal experience for me to hold this piece of history in my hand.”

Quance said the papers were a thank you letter from Queen Mary, an invitation to an event at the Royal York Hotel in Toronto, and a program from a church service in London.

“The papers contained in the book were a personal thank you letter from Queen Mary on Sandringham letterhead, an invite for Mrs. Ferguson to attend an event in 1951 at the Royal York Hotel with the Princess Elizabeth and Duke of Edinburgh, and a 1952 program for a service at St. Paul’s Cathedral in London to honour the recently deceased George VI and welcome the new Queen Elizabeth,” said Robert.

Sandringham House is a residence of the Royal Family and Queen Elizabeth.

The Mrs. Ferguson mentioned in the invitation is believed to be the wife of George Howard Ferguson, who was Premier of Ontario from 1923 to 1930.

“Queen Mary embodied the British ‘stiff upper lip’ and was known for being quite frugal … so I think she would approve of my Value Village purchase,” said Quance. In her lifetime, Queen Mary was known to have a hard work ethic, an orientation to family and duty, a motivation to struggle against the oppression of women, and a concern for members of the British Armed Forces, especially during the First World War and the Second World War.

As Queen Mary aged and eventually died, it was said that no one in the world had seen so much history and change “first hand.”

Regarding what he will do with the book, Quance said, “Right now, I am going to hang onto it. It is certainly a great conversation piece and there is a real charm and elegance to these pieces which is hard to resist.”

He added in a note to Beach Metro News that he had the signature of Queen Mary checked for authenticity and recently had a confirmation from Waddington’s Auctioneers and Appraisers that it is hers.