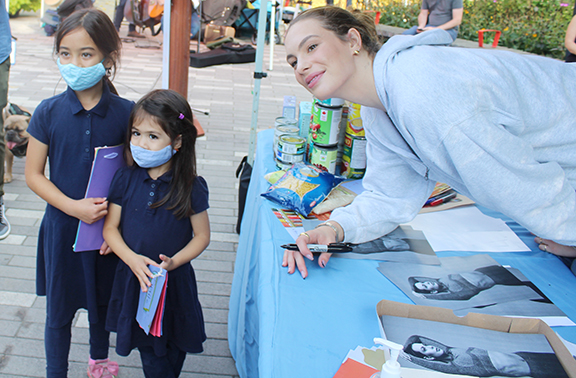 Photo above, Penny Oleksiak poses for a photo with Robin, 8, and Juniper, 4, after signing autographs for them at the Give Back with Penny Oleksiak event at Kew Gardens on Oct. 14. Inset photo, Audrey, 7, and Massimo, 8, show off the photos autographed for them by Oleksiak. Photos by Alan Shackleton.

Canadian Olympic hero and Beacher Penny Oleksiak came home to meet and sign autographs for a huge number of her fans yesterday, while also helping to collect donations for the Daily Bread Food Bank.

The Give Back with Penny Oleksiak event was held on the afternoon of Thursday, Oct. 14, at the entrance to Kew Gardens park on Queen Street East in the Beach.

Boxes full of donations of non-perishable food items from those attending were collected for the Daily Bread Food Bank. More than 1,200 pounds of food was collected at the event, said the Daily Bread in a note to Beach Metro News on Oct. 15.

For almost two hours, Oleksiak signed photos of herself and chatted with her fans who lined up beyond the plaza in front of the park and well along Queen Street East. “She is my favourite athlete in the whole world,” said Audrey, 8, holding the photos that Oleksiak signed for her. “She’s my sports hero.”

Oleksiak, 21, is Canada’s most decorated Olympic athlete in history.

Oleksiak grew up in the Beach and attended Monarch Park Collegiate.

Back in 2016, a community parade was held to celebrate her medal wins in Rio. To honour her locally for becoming Canada’s most awarded Olympian, Oleksiak said she wanted an event that would help those in need.

And that is how Give Back with Penny Oleksiak for the Daily Bread Food Bank came to be.

“For me, it’s awesome to be here and to be able to give back to the community,” she said.

Oleksiak brought along her dog Bean to take part in the celebration and food drive.

“If I’m in the Beach, I have to bring my dog,” she said. “I’m happy to be here and super-amazed by the turnout.”

After the struggles so many people have gone through over the past year due to COVID-19 and other health and economic challenges, Oleksiak said bringing the community together to help out those in need was extremely important to her.

“COVID has hit a lot of people hard in these last two years and it’s important that we are helping others if we can,” said Oleksiak.

Neil Hetherington, Chief Executive Officer of the Daily Bread Food Bank, spoke prior the start of the autograph session and thanked Oleksiak for making the event a community food drive.

“This is an example of Penny’s humble leadership and leveraging her incredible achievements for the benefit of others,” he said.

The event was opened with the singing of O Canada by students from the Williamson Road Junior Public School choir.

Very proud of the kids.

Alan great local story thanks Penny fabulous job and a lovely cause. Being an ex Beacher 1950s-1980’s living now on the West Coast of BC Pacific ocean now with another Swimming Legend Canada’s “Mighty Mouse” Elaine Tanner. Elaine won the first Olympic swimming medal for a women in 1968 also held the record 3 medals in a single games Elaine was thrilled for Penny when she broke that record in 2016. Both Elaine and I have fond memories of driving in the Olympic Penny beach parade when Elaine was the guest of honor. Joanna did an incredible job organizing it. “Once a Beacher Always a Beacher”. John Watt/Elaine Tanner