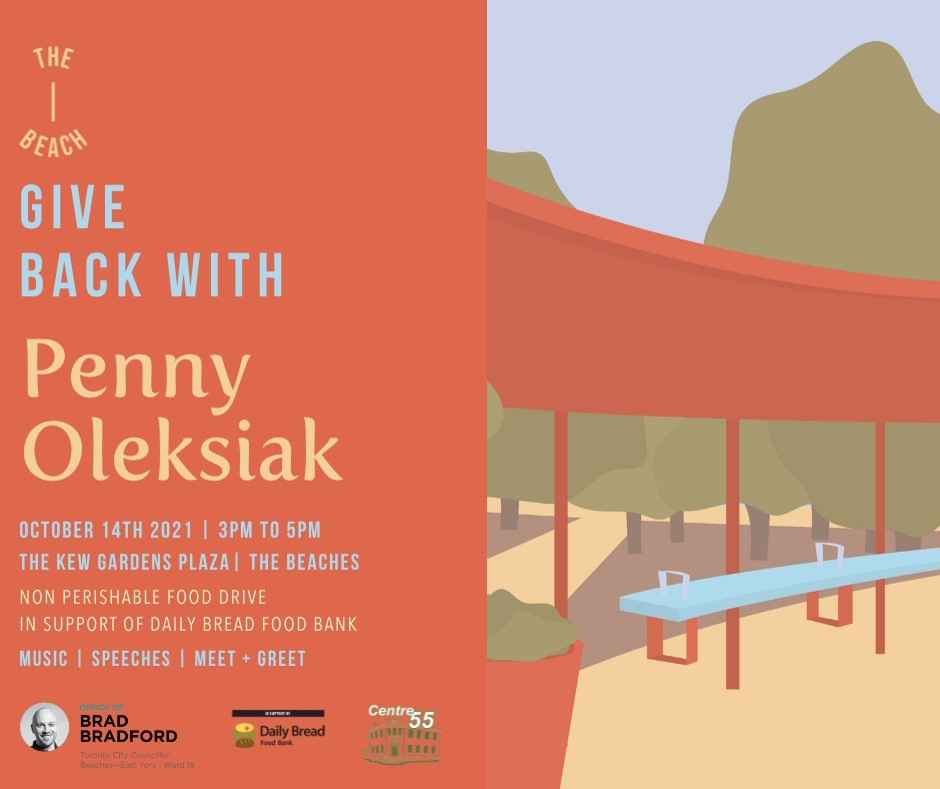 Those attending the Give Back with Penny Oleksiak event at Kew Gardens park in the Beach on the afternoon of Oct. 14 are asked to bring donations of non-perishable food items for the Daily Bread Food Bank.

Penny Oleksiak, Canada’s most awarded Olympic athlete of all time, will be back home in her Beach neighbourhood on the afternoon of Thursday, Oct. 14, to host a food donation drive for those in need.

The Give Back with Penny Oleksiak event takes place from 3 to 5 p.m. at the Queen Street East entrance to Kew Gardens park, just west of Lee Avenue. Those attending are asked to bring a donation of a non-perishable food item for the Daily Bread Food Bank.

The event will feature the singing of O Canada shortly after 3 p.m. by students from Williamson Road Junior Public School. Those speaking will include Beaches-East York Councillor Brad Bradford; Neil Hetherington, Chief Executive Officer of the Daily Bread Food Bank; and Oleksiak.

From 3:30 to 5 p.m., Oleksiak will be signing autographs and meeting with fans and supporters.

Oleksiak, 21, grew up in the Beach and attended Monarch Park Collegiate.

It was Oleksiak’s idea to turn Thursday’s community celebration of her Olympic success into a donation drive for the Daily Bread Food Bank.

“Penny is an East Ender and grew up right here in the Beaches. When the local community reached out wanting to celebrate her, she showed incredible humility and generosity. Instead of a celebration of her, she asked that we put our time and energy to support a worthy cause for those in need,” said Councillor Bradford.

“This is a special opportunity for us to come together in support of someone special and an initiative that’s going to help support those in need. We’ve all been inspired by Penny’s accomplishments as an athlete and Thursday’s event is yet another opportunity for us to be bold and draw on the energy of this local hero,” he added.

Give Back with Penny Oleksiak for the Daily Bread Food Bank is presented in partnership with the Beach BIA, Community Centre 55, Councillor Bradford, and the City of Toronto.