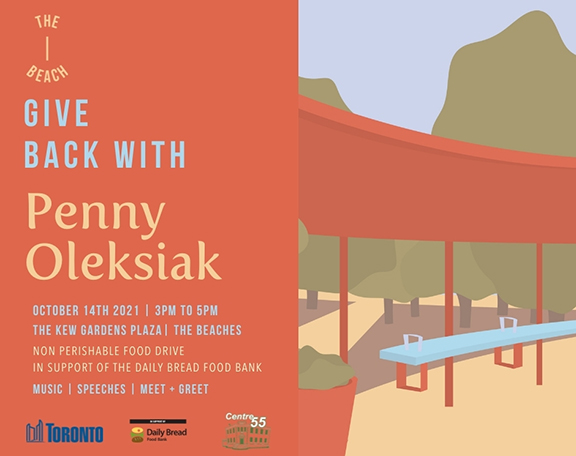 Those attending the Give Back with Penny Oleksiak event at Kew Gardens park in the Beach on the afternoon of Oct. 14 are asked to bring donations of non-perishable food items for the Daily Bread Food Bank. Inset photo shows Penny Oleksiak being interviewed by CBC Sports after one of her medal wins at the Tokyo Olympics this past summer.

East Toronto residents will have a chance to congratulate swimmer Penny Oleksiak on her record-breaking summer Olympic performance during an event next week to benefit the Daily Bread Food Bank.

Oleksiak, who grew up in the Beach and attended Monarch Park Collegiate, will be at Kew Gardens on the afternoon of Thursday, Oct. 14, to meet and greet fans.

By winning three medals in the pool at the Tokyo Olympic Games this past summer, Oleksiak became Canada’s most awarded Olympic athlete in history.

Oleksiak, 21, won a silver and two bronze medals in Tokyo. She added them to the gold, silver and two bronze medals she won five years ago at the Rio Olympics to give her a total of seven; more than any other Canadian Olympian.

The Oct. 14 Give Back with Penny Oleksiak event is from 3 to 5 p.m. near the front entrance to Kew Gardens, by the Cenotaph, just off Queen Street East.

Those attending are asked to bring donations of non-perishable food items for the Daily Bread Food Bank.

Give Back with Penny Oleksiak is being presented in partnership with the City of Toronto, Community Centre 55, The Beach BIA and the Daily Bread Food Bank.