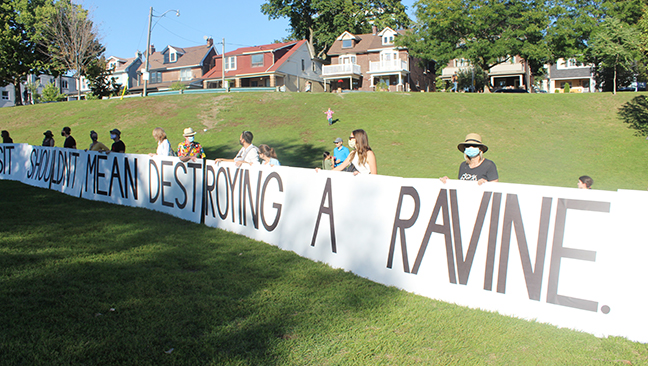 Residents take part in a demonstration at East Lynn Park last month over Metrolinx's plans to build a 400-foot concrete retaining wall in Small's Creek Ravine. A rally against Metrolinx's planning process and actions is set for Oct. 6 at Queen's Park. Photo by Alan Shackleton.

A number of East Toronto groups will be taking their concerns about the provincial transit agency Metrolinx and its actions to a rally slated for Queen’s Park this afternoon.

A Rally to Build Community Oriented Transit is set to take place on Wednesday, Oct. 6, at noon in front of the provincial Legislature at Queen’s Park.

Groups taking part in the rally will include Save Jimmie Simpson, Friends of Small’s Creek, Pape Area Concerned Citizens for Transit, Save T Park, Don’t Mess with The Don, the Lakeshore East Community Advisory Committee and Keep The Subway on Yonge.

“We are a coalition of diverse community groups from across the GTA who are adversely impacted by the Ford government and Metrolinx’s unilateral and reckless transit plans,” said a release promoting the rally from Build Transit Better.

“We believe transit planning should support local communities and safeguard the health and wellbeing of citizens and the environment. The Ford government and Metrolinx have it backwards with their Transit Oriented Communities which prioritizes transit expansion over community sustainability,” said the release.

Speakers scheduled to be at the rally will include Beaches-East York MPP Rima Berns-McGown; Toronto-Danforth MPP Peter Tabuns; and Mike Schreiner, leader of the Green Party of Ontario.

For more information on this afternoon’s rally, please go to the Save Jimmie Simpson Facebook page at https://www.facebook.com/SaveJimmieSimpson/