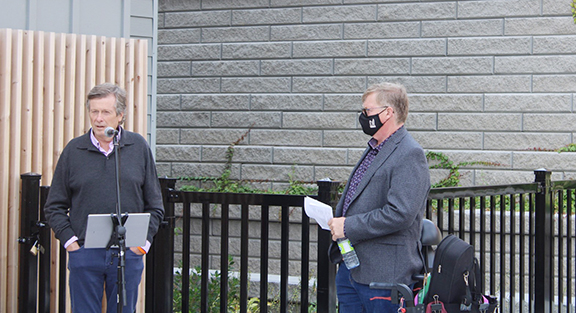 “We have moved folks out of parks and we are moving them into housing, we are giving them the dignity of a roof over their heads to support, to make them successful in the community,” said Crawford at the celebration on Saturday, Sept. 25.

The 56-unit modular affordable housing building provides support for homeless people, who have difficulties in paying for housing and even in acquiring food.

Tory said people are paying too much for their housing in Toronto.

“In a big fast-growing city like Toronto housing becomes more expensive and we are making an effort to address that,” he said.

“Part of that is addressing homelessness and to help people who need a little extra support in their lives.”

Along with this first modular housing building located just near Victoria Park subway station at 11 Macey Ave., other projects are being executed (including in East York) which will see a total of 250 new homes in the City of Toronto.

“We are supporting people who are in need of just a bit of support, they are fellow Torontonians and that is what makes the city great,” said Tory, pointing out that Toronto has a HousingTO 2020-2030 Action Plan with a goal to build 1,000 units of supportive modular housing across the city.

“That is why people from all over the world want to come to Toronto because they know that is how we live,” Tory said.

“We do not judge people, they are all Torontonians and if they need a bit of help we are going to give it to them.”