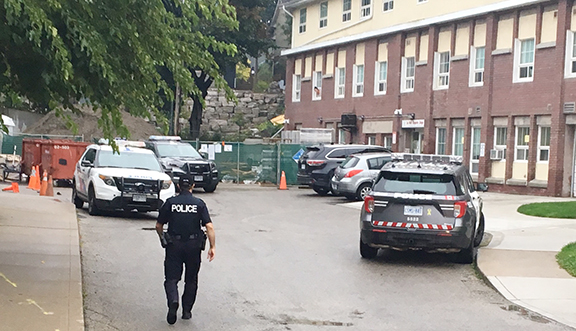 Police are at a residence at 419-425 Coxwell Ave. after a man in his 30s died as a result of a stabbing early this morning. Photo by Alan Shackleton.

A man in his 30s has died after a stabbing in a residence on Coxwell Avenue early this morning.

Toronto police have a taken a woman into custody in connection with the incident, but at this time there is no information on what if any charges have been laid.

Police were called to a residence at 419-425 Coxwell Ave., north of Gerrard Street East, just before 4 a.m. for reports of a stabbing.

When police arrived they found a man in his 30s suffering from critical injuries. The man was rushed to a hospital trauma centre where he later died of his injuries.

Police are still on the scene at the residence this morning on the east side of Coxwell Avenue just north of Casci Avenue and south of the railroad tracks.

The death is being investigated by the Toronto police Homicide Squad.