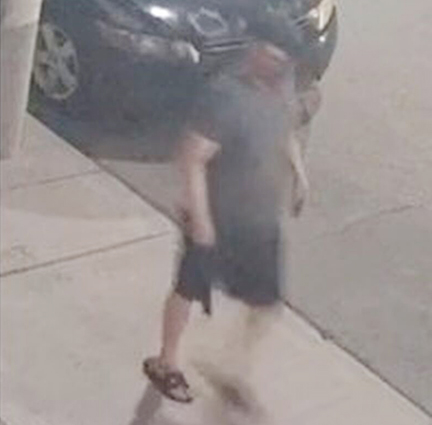 Toronto police are looking for information on this man in connection with an investigation into hate-motivated graffiti.

Toronto police are looking for a male suspect in connection with a hate-motived offence investigation in the Eastern and Knox avenues area.

Police were called to the area on the afternoon of Saturday, Sept. 11 after hate-motivated graffiti spray painted on three buildings was discovered.

According to police, a man spray painted the graffiti just after 6 a.m. on Sept. 11.

The same man is also responsible for graffiti painted on buildings in the Front Street Wes and John Street area, police alleged.

The man is described as six-feet tall, weighing 220 pounds, with a heavy build.

Police have released security camera image of the man.

Security footage of the suspect can also be viewed at

After consultation with the Toronto Police Service’s specialized Hate Crime Unit, the incident is being investigated as a suspected hate-motivated offence.

In a release announcing the investigation, police said:

“When suspected hate-motivated offences are reported to police, the investigation will be led by a Divisional investigator. The Hate Crime Unit will be made aware and specialized officers from that unit will support the investigation as needed.

“If it is alleged a criminal offence was committed (such as assault or mischief) and it is believed to have been motivated by bias, prejudice or hate, the officer-in-charge will consult with the Crown. If a person is charged and convicted of the offence, the Judge will take into consideration hate as an aggravating factor when imposing a sentence.