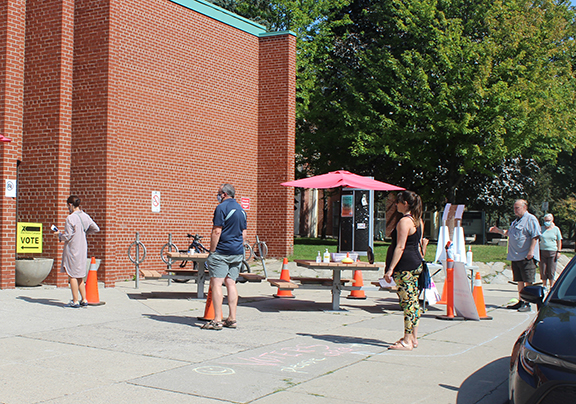 Voters in Beaches-East York line up at an advance poll earlier this week. Election Day is Monday, Sept. 20.

A Beaches East-York candidates meeting was held over Zoom on the evening of Thursday, Sept. 16.

Community members had the opportunity to submit questions to Beach Metro News editor Alan Shackleton before the event for the moderator’s consideration.

Some of the hot topics of the night included the COVID-19 relief effort, long-term care homes, affordable housing, Indigenous issues, and climate change.

After the candidates wrapped up their opening statements, Carter started the night by asking candidates which party is best equipped to handle the pandemic and navigate the country through the fourth wave and beyond.

Ruiz Vargas said that the NDP is best suited, citing the party’s role in increasing benefit amounts at the beginning through CERB from the proposed $1,000 to $2,000.

DeBoer gave three examples of ways the country can recover from the pandemic citing extending wage and rent subsidies for small businesses who were disproportionately affected in the Beaches East-York riding, helping out those who are hurting most through initiatives such as a guaranteed liveable income, and building back better and investing money smartly.

“A guaranteed liveable income has never been closer to reality, we understood this with CERB. And by getting rid of programs like CERB, getting rid of welfare and disability, combining (them) under one livable income can ensure not only greater accuracy and efficiency about how we’re using our money, but we can also make sure that nobody gets left behind,” said DeBoer.

Erskine-Smith said that the main theme in the Liberal Party’s platform is to finish the fight against COVID-19. He said his party has shown competency in this crisis evident in vaccine procurement and rollout, and how the federal government stepped up when Ontario was in the worst of the COVID-19 crisis.

“We’ve obviously extended supports beyond the course of this election. We said we’ll extend supports where…public health restrictions continue to be in place. We’ve already committed to extending the Recovery Hiring benefit into March,” he said.

Carter steered the conversation toward long-term care homes and residents, asking the candidates how their parties will better protect vulnerable populations living in congregate care.

DeBoer said that the statistic that long-term care residents accounted for more than 80 per cent of reported COVID-19 deaths is important to address. He said affordable quality care, national standards, and helping people have the right to stay in their own homes longer are the Green Party’s goals.

“It addresses long-term issues that we have with our current structure. The first thing the Green Party would do is bring long-term care under the Canada Health Act. That helps the federal government support provinces with the universal care necessary to make sure that we have the changes to quality, affordable care,” he said.

Erskine-Smith said long-term care home issues have been highlighted in the pandemic and many caucus members pushed for a stronger federal role.

“We have already committed dollars in this past budget, and before that the fall economic statement, towards safe long-term care fund but we have built on that commitment through this platform. There’s a $9 billion commitment using the federal spending power…to establish national standards, this work is already underway,” he said.

Ruiz Vargas said that what happened in long-term care settings can never happen again and that the lives of seniors are more important than LTCs’ profitability.

“(The NDP) are going to have the LTCs become public, and we’re going to pay the PSWs about $25 and occupational therapists as well. All of these professionals are related in taking care of our seniors,” she said.

Affordable housing has been a prominent issue in the Beaches East-York riding, and Carter cited statistics saying that home prices have climbed more than 70 per cent since Justin Trudeau took office in 2015. He asked the candidates about how they approach the issue of home equity versus affordability.

Ruiz Vargas said that social housing will always balance the market and that the NDP plans to cool down prices, and to stop families from being evicted or “renovicted.”

“I know that many Canadians are concerned about the prices because they’ve invested so much money to have prices go down. What we’re going to do as the NDP is build, restore, and maintain…We’re going to build 1.7 million homes in four years,” she said.

Erskine-Smith said that since 2015, housing has become a greater challenge and he knows that the federal government doesn’t have all the tools like zoning and supply, but it’s an issue to take seriously. He said that housing needs to be a core commitment going forward and that it will be, including addressing and ending homelessness.

DeBoer said that the housing crisis is two national crises: affordability and an availability crisis. He said that they must be taken seriously in tandem and that starts with declaring affordable housing and homelessness a national emergency.

“Why the Green platform is the best housing platform is looking at that second half when we’re talking about shelter. The Green Party is the only one who works at non-market housing…housing co-ops, not-for-profit, permanently affordable rental housing. This is beyond creating new housing, this is about finding what’s already there,” he said.

Erskine-Smith, as a renter himself, said younger residents in the middle class who do not own a home are “worse off” than those who are older than them and were able to buy into the housing market when prices were not so high.

Ruiz Vargas was passionate about the issue of affordable housing and used some of her time on another question to continue talking about it.

The night wrapped up with a final encompassing question that Carter put forth when he asked candidates what, in their minds, is the ballot question when residents go to vote.

Erskine-Smith said that that the ballot question in his mind is what government do voters want to finish the fight against COVID-19 and what party, leader, and candidate, they trust to be the best voice of reason to do the right thing.

He said that these aren’t just promises in an election platform but a body of work over six years now.

Ruiz Vargas said that the question for everyone should be how to better ourselves and the need to look at the necessities and cover them for everyone.

“We need to see what are these necessities…like climate is the beginning, housing, Pharmacare for all…Many seniors and many people are falling through the cracks. As well, Internet for all…Immigration, we need to work on immigration and work in peace.”

DeBoer said that he feels many people feel deflated from broken promises and scandals and that in this “very unnecessary election,” there has been a continuation of mudslinging and division without focusing on democracy. He encourages residents to vote for the platform they feel for the most.

“What I think the ballot question should be isn’t about who we can trust, it should be ‘How we fix our broken system?’ How can we start working together across those party lines, finding commonality within this broken system, and start getting joined accountability for our failures or for our future?”

To watch the recording of last night’s debate please visit https://us02web.zoom.us/rec/share/XjwboPD3Te0ZMnlZT_8E1hi0k36A5n6giwElmArSUtEYxtg4qfoPyXlEA7Lt6XBu.9U5zqBmb5p5LlKe2 and use the passcode eK5CtY6#.