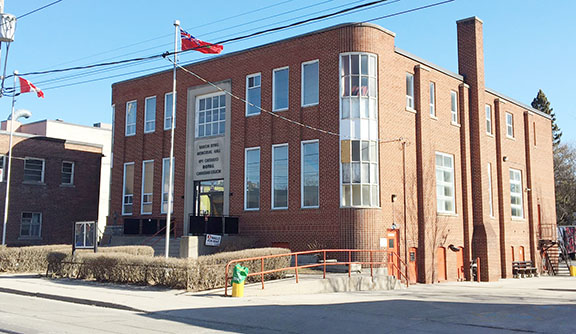 The Ruck 2 Remember Road to Recovery charitable fundraiser will be stopping in at the Royal Canadian Legion Branch on Coxwell Avenue on the afternoon of Sept. 16.

Volunteers taking part are slated to arrive at the Branch 1/42 of The Royal Canadian Legion at 243 Coxwell Ave. on Thursday, Sept. 16 at 4 p.m. The event honours both Canadian soldiers killed in Afghanistan and veterans, police officers, firefighters and paramedics who died the year before.

The organization was founded by Lino Di Julio who started the first Road to Recovery in 2014. Over a distance of 303 kilometres and seven days, volunteers rucked (carried) 158 bricks each engraved with the name of a Canadian soldier killed in Afghanistan.

“It was basically founded as a way to give back to the military community. I wasn’t able to serve myself. I have epilepsy, so I was looking to serve in whatever capacity I could as a civilian,” said Di Julio.

Di Julio said that a friend of his brought his attention to the charity ruck events that take place in the United States.

“I started poking around seeing who was doing what (in Canada) and I didn’t find anything. So we decided to do the first Road to Recovery ruck march,” he said.

For this year’s event, volunteers will be visiting Royal Canadian Legion Branches in the Greater Toronto Area over four days from Sept. 16 to 19. Branch locations to be visited include Legions  from Mississauga hrough Toronto, and finishing at Ontario Command in Aurora.

“(The number of volunteers) will vary from day to day. We’ll have six core people that will be doing the whole thing. And we’ll probably have two or three more that will join in on the third and fourth day,” said Di Julio.

According to the event’s GoFundMe page, the march covers two kilometres “for every veteran, police officer, paramedic, and firefighter that died the year before.” Di Julio said that this year’s ruck will cover 135 kilometres.

The goal is to raise funds for Operation: Leave The Streets Behind, the Legion’s national program that started out of Ontario Command. The program’s mission aims to “ensure that every veteran who is homeless or near homeless finds the help they need to leave the streets behind.”

“We don’t pocket any of it…Every dollar that we raise goes to Operation: Leave The Streets behind,” said Di Julio.

For the second year in a row, Ruck 2 Remember is also hosting a virtual event. This year’s virtual event challenges participants to ruck 150km carrying 35 pounds or more in 30 days.

“That’s another option for people to get involved if they want to help out the cause. All money raised this way also goes toward Operation: Leave The Streets Behind,” said Di Julio.