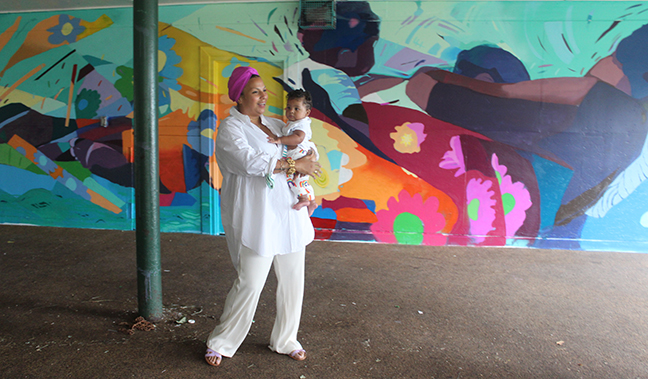 Artist Jacquie Comrie with her eight-month-old son Maximus in front of her mural on the wall of the Leuty Boathouse. Photos by Alan Shackleton.

The mural on the east-side interior wall of the Leuty Boathouse by artist Jacquie Comrie was unveiled at a ceremony on Sunday afternoon.

A sizeable crowd and a number of local politicians and other dignitaries were on hand for the unveiling celebration on Sept. 12.

The mural project for the boathouse’s inside walls was led by local residents Sapphira Charles; Ginetta Peters and Lisa Rochon as a way to reinvent the building and to celebrate the work of artists from the Black Indigenous People of Colour (BIPOC) community.

Originally the project was to also see the boathouse’s west wall painted with a mural by Chief Lady Bird, but that will hopefully happen later this year as she was unwell last week and unable to paint.

Comrie, who lives in the southwest Scarborough area, said at Sunday’s unveiling that the Beach has always been a special place for her and she was thrilled to be asked to paint a mural on the wall of the Leuty Boathouse.

“I’ve been coming down here since I was in high school,” she said. “I was a sad kid back in the day, dealing with depression. I used to hang out here and I’m very familiar with the area.”

Comrie moved with her family from Panama to the Pharmacy and Danforth avenues area when she was 14, and said her high school years were a challenge as it was hard to make friends and join into groups that had already been established.

“It was hard to be a part of things,” she said.

Comrie said she found a lot of solace coming to the beaches and the lake, and it has special meaning to her.

The focus of her mural is to encourage people to take care of their mental health, and her work is full of colour and happiness.

“I feel it’s very important using colour as a tool for mental well-being. So for people coming here it’s all about taking in the colours and being inspired by colour,” she said. As part of her signature on the mural, Comrie has written “Take Care of Your Mental Health.”

As a Black artist she said she was thrilled to be painting a mural in the Beach.

“There isn’t a lot of diversity in the area, especially in public art, and that’s why I am so honoured to have this space,” she said of the boathouse mural.

During Sunday’s celebration, Rochon spoke of the long history and importance of the Leuty Boathouse.

“We wanted to come up with a way to activate this historic structure and bring it back to the shoreline,” she said.

Rochon said the boathouse was originally much closer to the lake but was moved north of the Boardwalk to protect it after Hurricane Hazel in 1954. She said in the 1940s it was often used by the community as a dance hall.

“I’m told in the 1940s people would wait in their canoes for a dance card,” she said.

Making the boathouse a beautiful place for residents to enjoy is the key theme of its artistic reinvention.

“Great art is made by great artists and Jacquie Comrie is on the top of our list,” said Rochon.