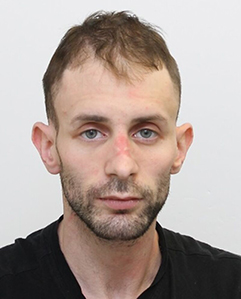 Toronto police are looking for Tyler George, 28, on a charge of manslaughter.

Police have released the name of a man wanted in connection with the death of a 77-year-old man last month in the area of Woodbine and Danforth avenues.

Yesterday, police said they were looking for a 41-year-old woman on a charge of manslaughter in connection with the death of John Manion, 77.

On Friday, Sept. 3, police issued a release saying they were also looking for Tyler George, 28, on a charge of manslaughter in the incident.

In the release, police said George is to be considered violent and dangerous. He is not to be approached, and if anyone spots him they should call 9-1-1 immediately.

Police are also looking for Arja Duffy, 41, in relation to the incident. She should be also considered violent and dangerous, and not be approached, police said.

Manion died in hospital on Aug. 29 due to the injuries he suffered in an alleged assault which took place on the afternoon of Friday, Aug. 6, police said.

As a result of the assault, Manion was taken to hospital in critical condition, where he remained until his death on Aug. 29.