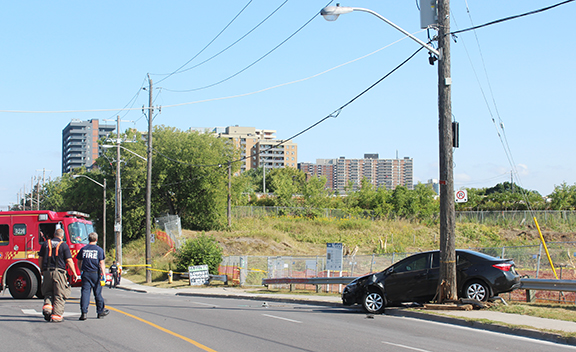 A woman in her 60s has been taken to hospital to be treated for a serious head injury after being struck by the driver of this vehicle on Victoria Park Avenue this morning. The vehicle then struck a hydro pole which has resulted in a power outage for parts of southwest Scarborough and the Upper Beach. Photo by Alan Shackleton.

A female pedestrian has been taken to hospital after she was struck by the driver of a vehicle on Victoria Park Avenue near Musgrave Street on the morning of Tuesday, Aug. 31.

The woman who was struck is believed to be in her 60s. She was taken to hospital to be treated for a serious head injury.

The incident took place at approximately 9:14 a.m. this morning.

The vehicle involved then struck a hydro pole, which has resulted in a power outage for a significant area of southwest Scarborough and the Upper Beach.

The damage to the hydro pole was so significant that it will have to be taken down and replaced. The estimated time for power to be restored in the area is 4:50 p.m. today, according to Toronto Hydro.

Toronto police are investigating the incident in which the woman pedestrian was struck by the driver of the vehicle as it was heading northbound on Victoria Park Avenue.

Victoria Park Avenue is closed between Musgrave Street and Danforth Avenue while police investigate, and hydro crews work on replacing the pole.