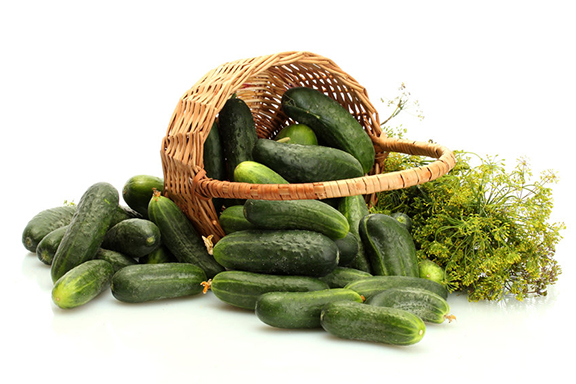 Jan Main shares her daughter Alexa's recipe for Fresh Cucumber Pickles in this edition of The Main Menu.

“Mum, I’ve packed a jar of fresh pickles in your bag. You’ll have to refrigerate them when you get home. They’re not processed in a canner.”

Well, fresh pickles. We’ll have to see what they are like?

It was some time later that I arrived home, unpacked, including the jar of fresh pickled cucumbers. Timely as it was past lunch and those pickles were calling, perfect to have with a snack.

There was a small slice of pickled cucumber on the top, just right for sampling. MMMM. Good! Very good!!!

In fact, the first taste called for more. Just the right companion to that sandwich.

After eating several more, I called my daughter, Alexa for her recipe and asked her if I could use it for you, the readers, as it is a streamlined version of canning.

Fresh pickles can be made simply in minutes and refrigerated a day or two to develop their flavour, then eaten.
These had been refrigerated for only three days and were “finger lickin good!”

I hope you try them and enjoy them as much as I do. I have now made several batches of my own since the first taste.

The term “fresh” means that the pickles have not been processed in a boiling water bath or canner which simplifies the making so that a small batch can be prepared in minutes but must be kept refrigerated and used within weeks of making.

On the other hand, processed pickles are shelf stable and can be kept safely for at least a year. Of course, once opened, they must be refrigerated and used up just like the “fresh” pickles.

After a discussion with Alexa, we decided this recipe would work well with baby carrots, small onions and beans as well as the cucumbers.

The hardest part of the recipe is finding a good supply of fresh dill with the dill flower. The dill flower with all its seeds gives the pickles their characteristic “dill “flavour. If you do not have your own garden source of dill with flower, usually farmer’s markets carry it and some supermarkets.

However, when I wanted to test the recipe there was no dill available but I did have fresh garden tarragon. It was a tasty substitution!

Thoroughly wash lids and jars, leaving them upside down on a clean towel while preparing the pickles.

Wash cucumbers; cut in half then slice in ¼ inch (6.5mm) lengths.

In a saucepan combine vinegar, water, sugar, salt, garlic and cayenne. Bring to a boil; simmer about 5 minutes. Meanwhile, line the bottom of the jars with half the dill blossoms and arrange cucumber slices standing up inside the jar and pack firmly.

Cover prepared vegetables in jars with the t-towel.

Bring the brine solution to the boil; boil about 5 minutes to develop the flavour. Remove towel and pour enough liquid over the vegetables to cover leaving ½ inch (1.2 cm) headspace. (There should be enough brine for 2 jars of pickles.)