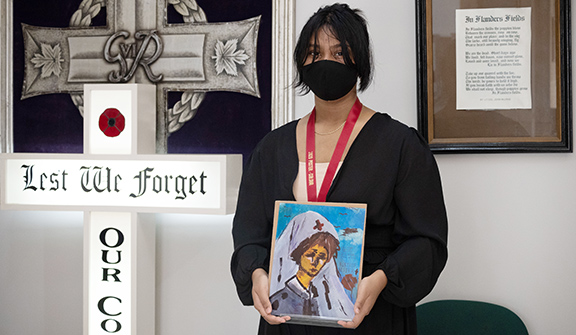 Hossain, 13, was awarded second place in Canada for her poster depicting a nursing sister.

She was honoured with a presentation of the award during a ceremony held at the Royal Canadian Legion Branch 11, which is the Branch she first submitted the poster to, on Dawes Road late last week.

Hossain was encouraged to enter the art competition by her Grade 7 teacher, who recognized her potential and pushed her to try submitting for the contest. Until then, Hossain said she had never considered taking her art seriously.

Her teacher would encourage her to be more optimistic with how she viewed her creations and would go out of her way to show off her artwork. Before then, Hossain said she wouldn’t hesitate to rip up a piece she didn’t like and throw it away.

Now, she knows that she sometimes needs to leave a piece she’s working on and come back to it after some time has passed, or even just keep it to look back on in the future.

Her poster won honours at the Legion’s Branch, Zone, and District levels before landing the second place prize on the National level, where submissions came from across the country. The poster features a nursing sister against a striking blue background, and was inspired by all the women that have sacrificed their lives and safety to serve and provide medical aid in military conflicts.

Specifically, the poster pays tribute to Nursing Sister E. L. Pringle of the Canadian Army Medical Corps who was killed in a bombing attack while serving in France during the First World War.

“I wanted to empower women,” said Hossain. “They play a vital role.”

She said that, most of the time, men end up being the face of war or of military service.

What she wanted to do with her submission was bring attention to the important role women played throughout these conflicts, whether it was on the battlefield or in the hospitals.

For Hossain, Remembrance Day is important because it’s become too easy to forget the depth of the sacrifices these men and women made to keep our country safe.

She hopes people will take time to reflect on what it meant for soldiers and nurses to leave their families behind, knowing they may never see them again, in order to keep their country safe.

Helen Pearce, who organized the event for Branch 11, said Hossain has made everyone at the Branch very proud. She also thanked her for providing an opportunity to bring, albeit a small, group of people together again in the first official gathering at the building on Dawes Road since the COVID-19 pandemic began to present the award.